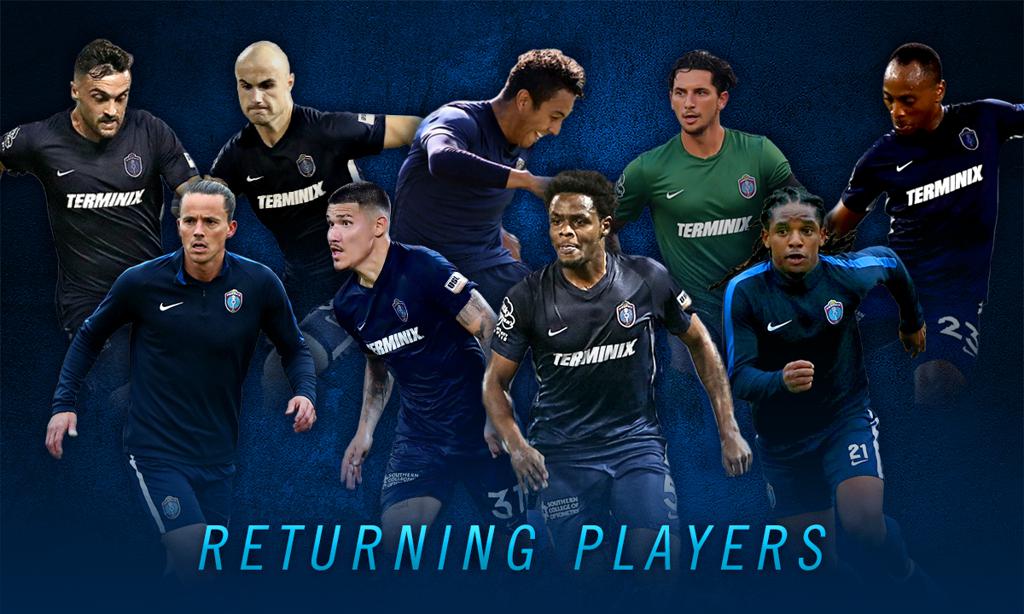 MEMPHIS, Tennessee – Memphis 901 FC has announced the first pieces of its 2020 roster, as the club will have nine returning players from its inaugural 2019 season including leading goal-scorer Brandon Allen, defensive stalwarts Marc Burch and Liam Doyle, and versatile midfielder Dan Metzger.

“I’m very excited to have this core group of players returning for us in 2020,” 901 FC head coach Tim Mulqueen said. “We’re bringing back a very mature, very experienced group who understands our culture. They will be able to drive the ship forward much faster than we did last season, and they will be able to teach the new players we will be bringing in how we do things the Memphis 901 FC way.”

In all, eight of the returners made at least 10 appearances in Memphis’ inaugural season, and six made double-digit starts. Captain Burch started all 31 matches he appeared in, playing every minute, and fellow defender Doyle made 13 starts for 901 FC after being signed on Aug. 5 following starting 15 matches for Nashville SC to open the season. Da Silva also joined Memphis on Aug. 5 from MLS’ Orlando City SC and started 11 matches for 901 FC.

Allen made the most of his 19 starts for 901 FC after arriving on June 26 from Tampa Bay Rowdies, finishing the season with a team-high nine goals including three two-goal performances. Counting a goal with Tampa Bay before joining Memphis, Allen’s 10 scores in 2019 were tied for 13th in the Eastern Conference.

Metzger was a highly-valuable midfielder for Memphis in 2019, averaging over 80 minutes per match across 26 starts. Along with Allen, Metzger won the 2016 USL Championship Final with New York Red Bulls II. Muckette and Paul combined for 37 appearances and 22 starts this past season, and Muckette put home two goals and assisted on another.

Two players, Gonzalez and Hodge, will be looking to bounce back from injuries that prematurely ended their 2019 seasons. Hodge made 10 appearances and eight starts, scoring a goal, before hurting his knee, and Gonzalez injured his knee in preseason training and missed the whole year.

901 FC was in the hunt for a playoff berth in its first season up until the final week of the regular season. The club finished the year with a 9-18-7 record and 34 points in the USL Championship Eastern Conference. Memphis fans packed AutoZone Park to the tune of an average of over 6,600 per game, good for ninth in the league and second among expansion teams.

Additional news and information about the 2020 roster, schedule, tickets, and more will be available in the coming weeks and months. Season ticket information for 2020 is available at www.memphis901fc.com/seasontickets.

First Fan Forum Tonight
Memphis 901 FC will be hosting a series of Fan Forums in the region leading up to the 2020 season, with the first set for tonight at The Brass Door in Downtown Memphis. Doors open at 7 p.m., and the Fan Forum is scheduled to begin at 7:30. Each Fan Forum will feature a question-and-answer session with 901 FC President Craig Unger, owner Tim Howard, and head coach Tim Mulqueen. Details about the next Fan Forums in December and January will be announced at a later date.

About the USL
The United Soccer League (USL) is the largest professional soccer organization in North America, possessing nearly a decade of experience in bringing the world’s game to communities across the United States and Canada. Overseeing the USL Championship, USL League One, and USL League Two, the organization is built on a proven and recognized model in international football and counts more than 100 clubs in its membership.