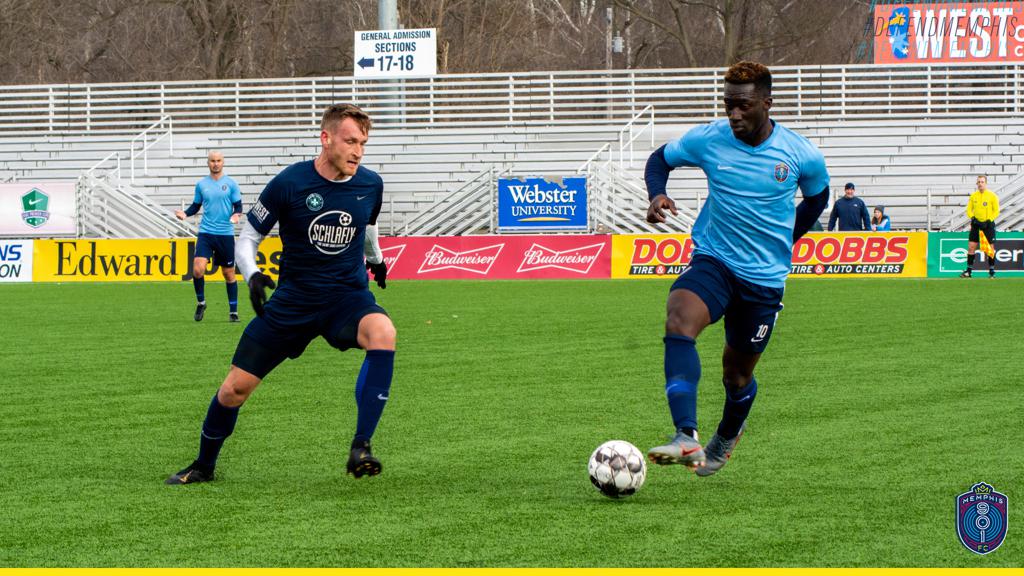 MEMPHIS, Tennessee – In a Saturday afternoon USL Championship preseason matchup, Memphis 901 FC fell behind on a 15th minute goal in a 2-1 loss to Saint Louis FC at West Community Stadium just outside of St. Louis, MO.

The home team struck first on Saturday, as Kyle Greig scored in the 15th minute on a header following a Saint Louis corner kick. Memphis keeper Jimmy Hague made a pair of saves going into the halftime break, which kept Memphis within striking distance.

901 FC nearly tied the match in the 46th minute, as midfielder Duane Muckette tallied his second chance of the match but was turned away by Saint Louis’ second half substitute at keeper. In the 56th minute, Saint Louis extended the lead to 2-0.

Nearly immediately after 901 FC fell behind by a pair, a free kick from Marc Burch found the back of the net and trimmed the deficit to just one. Burch shot from just outside the box and bent it around the wall with a curl into the bottom left corner. Moments later, Memphis turned to keeper Jim Barkei, who kept Saint Louis off the board for the final 20 minutes, but 901 FC failed to put another shot on net after Burch’s goal.

901 FC continues its preseason slate in two weeks, as the club will face Forward Madison FC on Sat. Feb. 22. That match will take place at Birmingham-Southern College, with the start time TBD. Memphis will play its lone home preseason matchup on Sat. Feb. 29 at 6 p.m. at AutoZone Park against the University of Memphis.

Tickets for the 2020 season are available at www.memphis901fc.com/tickets.

Substitutions: 70’ Jim Barkei on, Jimmy Hague off…70’ Triston Hodge on, Marc Burch off, 72’ Trialist on, Muckette off

Substitutions: 46’ Berner on, Morton off…Paris Gee on, Gagnon-Lapare off…Sam Fink on, Adewole off, Fisher on, Phanuel Kavita off…Trialist on, Bryan off…Trialist on, Fall off…Oscar Umar on, Wharton off, Nichi Vlastos on, Kadeem Dacres off…Trialist on, Joaquin Rivas off… Russell Cicerone on, Kyle Greig off…66’ Morton on, Berner off