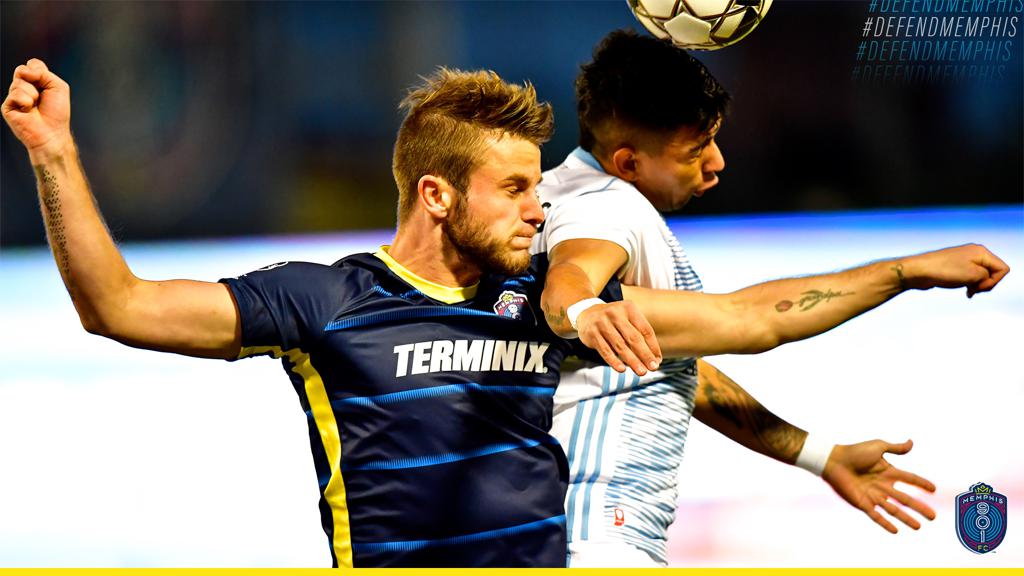 In a blistering start, Memphis 901 FC drew first blood in this opening week fixture from AutoZone Park. It only took nine minutes for Brandon Allen to open his 2020 account for 901 FC. The New Jersey native collected service from Pierre Da Silva and evaded three Indy defenders before tucking away the first shot of the game.

Things looked good for the Bluff City team as the intermission neared, but the visiting Indy Eleven pulled one back in the third minute of stoppage time. Wingers Carl Haworth and Ayoze linked up to put the halftime score at 2-1.

Although the goal from the Spaniard altered the celebratory mood inside AutoZone Park, 901 FC started the second half much as they did the first, with pressure. Pierre Da Silva, Duane Muckette, and Jose Baxter all took turns endangering the Indy Eleven goal, but the third wasn’t to come.

Tyler Pasher recorded the first half of his eventual brace in the 69th minute when he picked up the ball in his own half and made a solo run that concluded in an equalizing goal.

The 2019 Indy Eleven goal scoring leader poked home his second of the game just three minutes later when substitute Nick Moon served it across the Memphis goalmouth to take things to 3-2 for the Circle City club.

Any chance of taking something from the opening bout of 2019 was lost when Carl Haworth converted on a deflected cross in the 83rd minute.

“I saw two great goals, about a half a dozen chances. For me, there is a lot of improvement in that area [over 2019]. We took a Conference Finalist and put them on their heels.” Mulqueen said. “Our press was very good for long stretches of the game, I think we just need to do a better job of adjusting when teams adjust to us… I know this one stings for our boys, it stings for me, but there is a lot of good to that game as well.”

“We need to make sure of all the little details that make up a winning performance, we take care of for an entire game.” Mulqueen said.

The 8,571 strong (sellout) crowd was a record-high for Memphis 901 FC at AutoZone Park.

“Our players got a big boost from the fans,” Mulqueen said after the game. “I want to thank the fans for coming out tonight, and for their support up until the very end. I love our fans here, I love how passionate they are about it."

Memphis 901 FC take to the pitch next Saturday night when they take on Saint Louis FC, kickoff from AutoZone Park is set for 7 p.m.