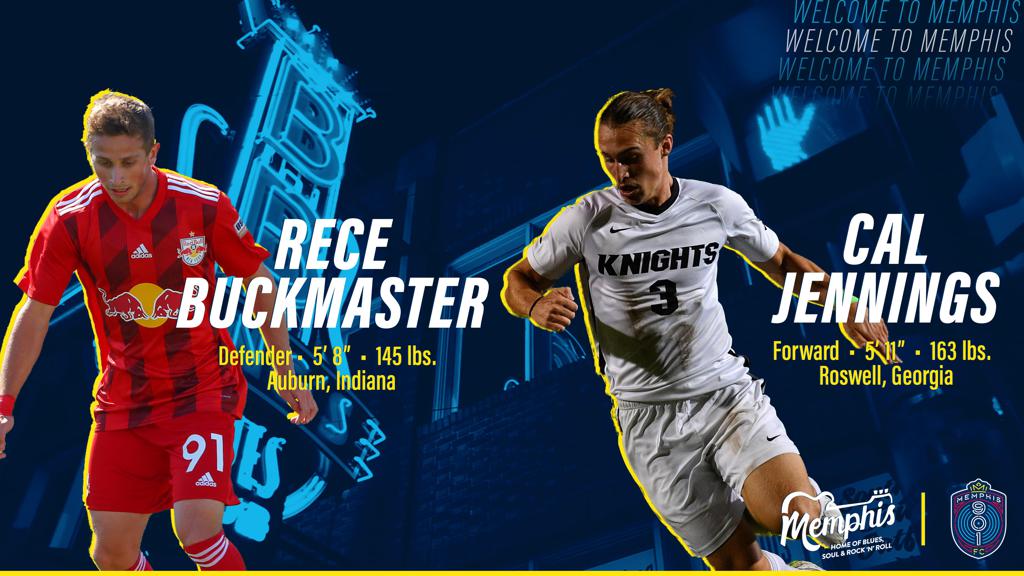 Jennings will add another goal scorer to the 901 FC attack while Buckmaster brings versatility to the backline.

“Cal is a proven goal scorer,” Mulqueen said. “He’s quick and nippy, so he gives us something different than we have upfront with our other strikers.”

Jennings was drafted by FC Dallas as the 17th overall pick in the 2020 MLS SuperDraft but was released before signing a contract.

He played collegiate soccer for the University of Central Florida and in 2019 was named AAC Offensive Player of the Year, All-AAC First Team, USC All-East Region First Team and a MAC Hermann Trophy Semifinalist.

“His energy and commitment to get behind a defense will certainly give us a new dimension in our attack,” Mulqueen said.

Buckmaster signed with the team on March 11, a day before the USL’s suspension of play.

“Rece has incredible instincts in his defending and can play either full-back position,” Mulqueen said. “He has great character and comes from winning programs both in college and professionally.”

The Auburn, Indiana native was selected by New York Red Bulls as the 32nd overall pick in the 2019 MLS SuperDraft. He made his MLS debut on Aug. 4 in a 2-0 win over Toronto FC.

Last season, Buckmaster made seven starts and played 660 minutes with the first team, including a start in the 2019 MLS Cup Eastern Conference Quarterfinals against Philadelphia. In 2019 he also made 19 appearances and played 1475 minutes for Red Bulls II.

His last two seasons at Indiana University, Buckmaster was a part of the squad that reached consecutive College Cup quarterfinals appearances in 2017 and 2018. Over 82 appearances, he collected five goals and 12 assists for the Hoosiers.

Jennings, Buckmaster and the rest of the 901 FC squad look toward their first game back on Wednesday, July 15, against Birmingham Legion at 7 p.m. Fans can watch the match on ESPN2.