Memphis Takes a Draw in First Match Back Home 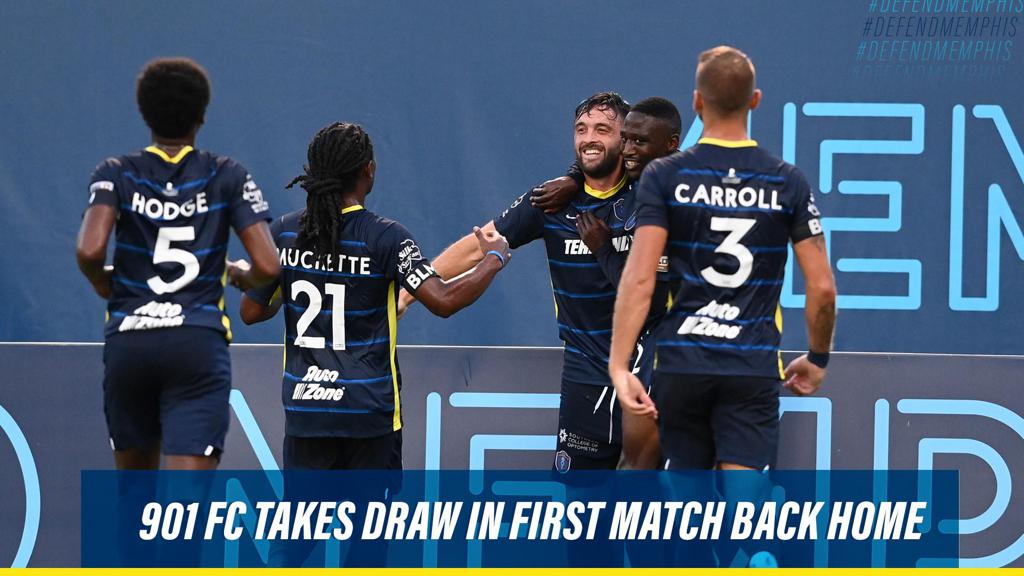 Memphis 901 FC returned to AutoZone Park on Saturday for the first time since their season opener on March 7.

Even with the limited capacity, the “welcome home” cheers could be heard from the stands as the team took the field.

Brandon Allen added to the excitement with a back-post goal off a ball played across by Rafael Mentzingen in the 16th minute. Following the goal, Memphis sustained pressure and possession throughout the first half creating four quality chances but failed to convert.

Charlotte, who had yet to play a match since the return of the USL, seemed to settle in throughout the second half maintaining 56 percent of procession. They tied the match early on with a set-piece goal from Luke Haakenson in the 51st minute.

Rece Buckmaster responded quickly with a goal in the 56th minute regaining the lead for Memphis at 2-1. The goal was Buckmaster’s his first for the club. Since the USL’s return, he has played every minute for Memphis.

Tensions rose both on the field and in the stands as Charlotte got their second equalizer on a controversial play. The goal from Valentín Sabella came in the 83rd minute of the match.

For the third consecutive match, Cal Jennings subbed in bringing fresh legs and new life to the Memphis frontline. While Jennings created many opportunities, including a back-post pass to a sliding Duane Muckette that had fans out of their seats, Memphis was unable to collect a go-ahead goal.

The draw brought Memphis to two points. The club currently sits in third place behind both Charlotte and Birmingham. Memphis returns to AutoZone Park this Saturday to take on Saint Louis FC.