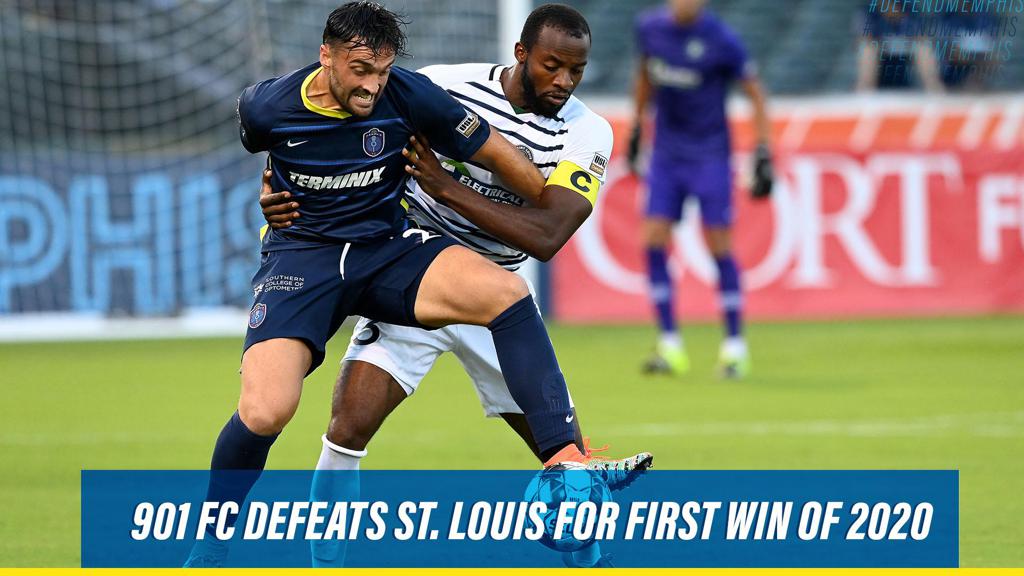 Memphis 901 FC collected three points in front of the home crowd with a 1-0 win over Saint Louis FC.

Rece Buckmaster had fans out of their seats early on connecting with Keanu Marsh-Brown on a back-post run, but Saint Louis defender, Phanuel Kavita, joining the play late, deflected the ball just wide.

Memphis continued to string quality chances together the entire first half, collecting seven shots, but failed to convert.
The Saint Louis defense seemed to have Memphis top goal scorer Brandon Allen figured out, containing him to just 15 touches in the first half.  Marsh-Brown and Rafa Mentzingen led the Memphis offense. The pair, who have each been dominant on the outside, tallied five shots, four crosses and two key passes in the first 45 minutes of play.

St. Louis came out aggressive to start the second half, but Memphis got the upper hand scoring in the 54th minute. It was Marsh-Brown who put Memphis on the board with a tap-in goal on a ball played across the six-yard box from Mark Segbers.

Following the goal St. Louis became much more aggressive offensively, but the Memphis defense held strong. Although St. Louis maintained 64.1 percent of possession and had four corner kicks through the second half, Memphis gave up just one shot on frame.

As St. Louis desperately tried to score late in the match, play on the pitch became physical from both teams. Memphis ended the match with a season-high five yellow cards.

Memphis returns to the pitch this Saturday, Aug. 8 to take on North Carolina FC at AutoZone Park. A limited number of tickets for the match will go on sale to the public on Tuesday, Aug. 4 at 10 a.m.