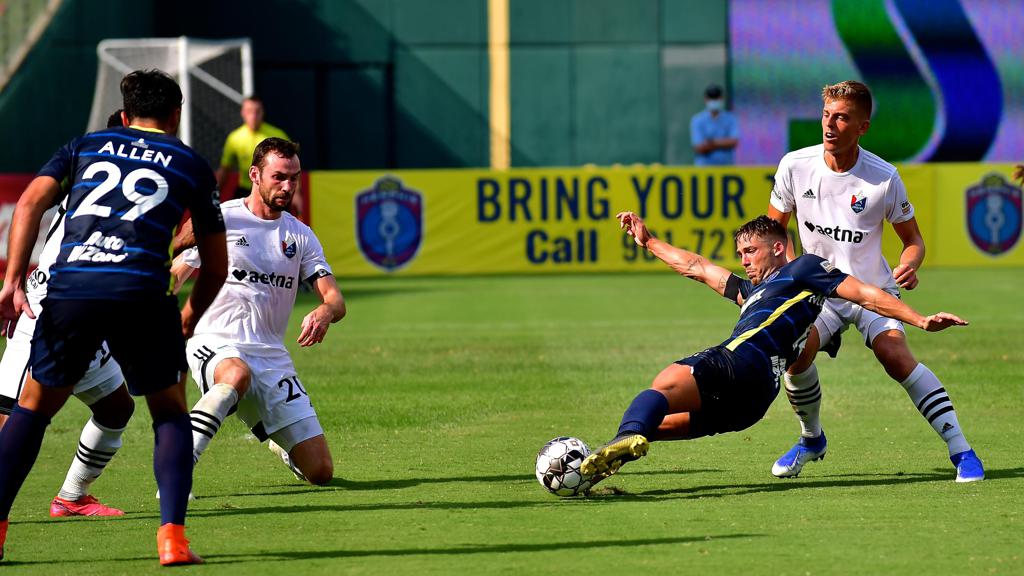 The match, originally slated for 7:30 p.m., started at 4 p.m. to accommodate the ESPN Deportes broadcast schedule and brought Memphis’s highest temperature of the season at 93 degrees at kickoff.

The starting lineup saw a new look for Memphis from the two previous matches. Jimmy Hague got the start in goal and midfielder Leston Paul sported the captain’s armband. This was Paul’s first time filling the role of captain since signing with Memphis prior to the 2019 season.

Just like the weather, Memphis came out hot maintaining a high press and over 55 percent of possession in the first half. In the first 45 minutes of play, Memphis had nine shots, 11 crosses and four corners opposed to North Carolina’s four shots, seven crosses and one corner.

While Memphis had the upper hand for a majority of the first half it was Akeem Ward who put North Carolina on the board first with a goal in the 38th minute. Ward’s goal, assisted by Pecka, came on a one-timer from the top of the 18-yard box to the back post.

Memphis responded quickly to the goal creating two quality chances to end the half but could not convert.

It was North Carolina who came out gunning early in the second half. Around the 50th minute, North Carolina forward Hadji Barry broke free for a one-on-one opportunity on goal which ended with Hague’s first save of the night. It was the speedy recovery run by defender Mark Segebers to cut off the angle and ruin the touch for Barry.

Although Memphis held possession for over 56 percent of the second half, they could not convert. The final whistle came after eight intense minutes of added time where Memphis pressed hard, but the North Carolina defense held.

This is the first time this season Memphis has lost while outshooting their opponent.

Memphis starts a three-week road trip with a match next Saturday against Charlotte Independence.