Matt Hundley Scores in Stoppage Time to Give Memphis the Win 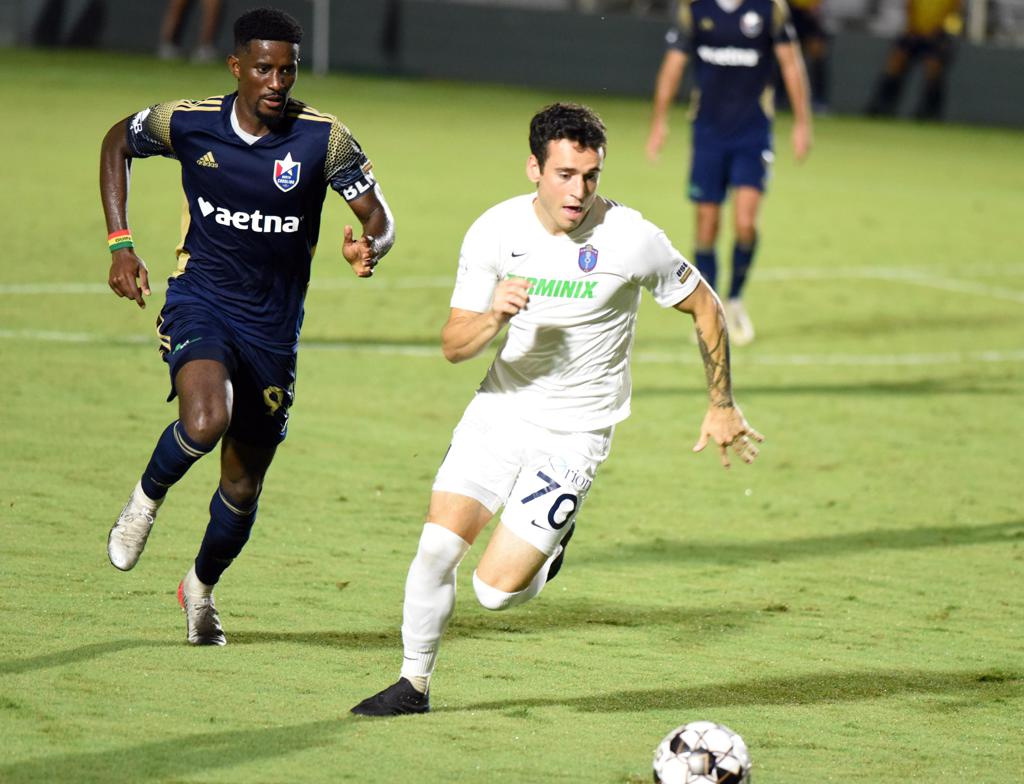 Memphis began a three-match road trip on Thursday in Cary, North Carolina to take on North Carolina FC. As the bottom two teams in Group G, both clubs greatly needed the three points.

North Carolina’s Hadji Barry had the first opportunity of the match. Unmarked from the middle of the box his shot did not challenge starting keeper Jimmy Hague as it went over the crossbar.

Early on the match was all NCFC. They dominated over 70 percent of possession, maintained a high pressure and tallied four shots to Memphis's one, but in the 20th minute things seemed to change. Suddenly, Memphis was able to connect more on passes and control the pace of the match a bit more.

In the 30th minute, Memphis took the lead with a goal by Rafael Mentzingen. The assist by Jose Baxter came on a 40-yard ball played in the air from midfield to the top of the 18-yard box. Mentzingen brought the ball down with his right foot then defeated NCFC defender one-on-one to sneak a left-footed shot by keeper Alex Tambakis.

Although the stats did not favor them, Memphis went into halftime with a 1-0 lead.

Two minutes into the second half NCFCs Dre Fortune had a dangerous chance from the top of the six, but his shot sailed over the top of the goal and from there, NCFC chances kept coming.

Memphis made a defensive shift in the 63rd minute bringing in Raul Gonzalez for Keanu Marsh-Brown and moving from a four-defender formation to five defenders.

After adding a defender, Memphis was able to push forward more to create chances at goal collecting more shots than before the shift.

In the 71st minute, Matt Hundley was subbed in as goal scorer Mentzingen went to the ground with cramps in his legs.

Just four minutes after entering the match Hundley found the ball at his feet on a pass by Cal Jennings at midfield. Hundley dribbled the length of NCFC's half, entered the box, crossed the ball over to his left foot and put it past Tambakis in the lower-left corner.

Following the goal from Hundley, NCFC seemed to see a boost of energy. From the 80-90th minute, they dominated play. It was only a matter of time when Forward Robert Kristo found the back of the net in the 86th minute on a header off a corner kick. Five minutes later, another goal for North CarolinaNCFC tied the match at 2-2. The goal came after some pinball action inside the Memphis box. Defender DJ Taylor found himself unmarked at the top of the six-yard box and headed the ball past Hague.

As stoppage time ticked on it seemed that Memphis once again would give up a lead late in the match and settle for a tie.

Tommy McCabe on a free kick connected with the head Liam Doyle, a cross that proved difficult for NCFC bouncing around in the box. Just when the danger seemed to clear, Memphis defender Zack Carroll found Hundley on a through ball to the right corner. Hundley one-on-one with NCFC defender Taylor, worked himself free at the top of the box and buried the ball in the side panel of the net on the far side in the 90+8 minute of play.

After two more agonizing minutes waiting for the whistle, Memphis was able to celebrate knowing they had three more points as they try to scrape their way into playoff contention.

Memphis returns to the pitch in Cary, North Carolina this Sunday at 6 p.m. Fans can tune in locally with CW30 of ESPN+.