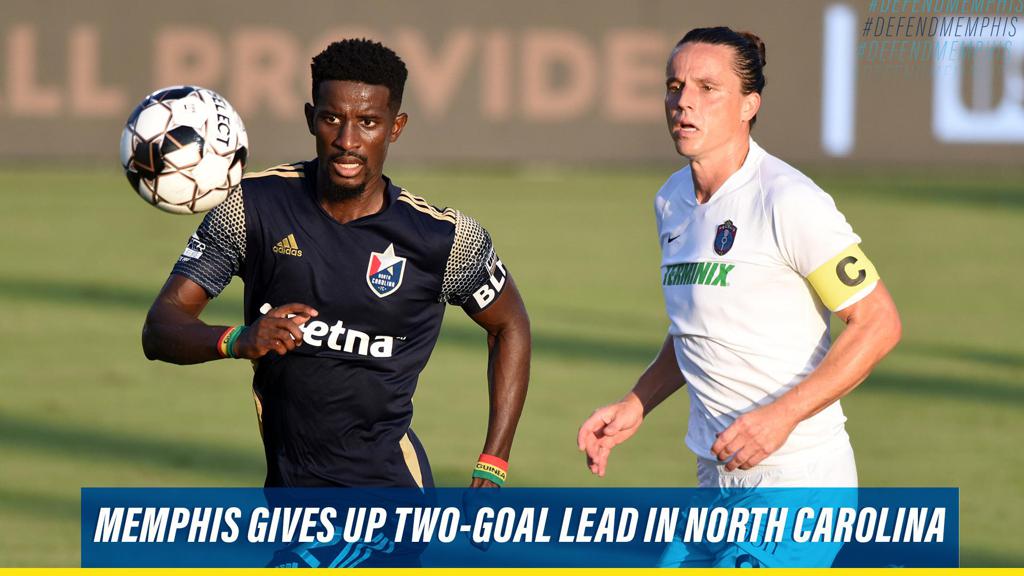 Heading into the match Memphis and NCFC we’re tied at the bottom of Group G with 10 points. Trailing Charlotte by 11 points, Memphis needed to take three points to keep their hopes of playoffs alive.

Memphis brought a youthful look to the pitch starting Raul Gonzalez in the back and Cal Jennings, Rafa Mentzingen and Matt Hundley up top. The young strikers brought energy to the start of the match. Where NCFC came out strong on Thursday, it was Memphis started hot getting four shots in the first ten minutes of the match.

Ten minutes into the match NCFC stepped up and started maintaining more possession, but it was still Memphis that struck first.

On a corner by captain Marc Burch, forward Jennings freed himself at the top of the six-yard box. NCFC keeper Tambakis stood no chance as Jennings buried a header in the upper right corner in the 24th minute of the match.

Seven minutes later Jennings scored again. This time assisted by Gonalez. After making a run from the backline, Gonzalez played the ball on the ground at the six-yard box. Through two defenders and keeper Tambakis, the ball from Gonzalez reaches a sliding Jennings who pushes the ball to the back of the net.

Holding just 38.5 percent of possession, Memphis tallied seven shots in the first 45 minutes of play and went into halftime with a 2-0 lead.

Twelve minutes into the second half the scoreboard showed a different story.

NCFC’s first goal, like Memphis, came off a set piece on a corner. The ball bounced around in front of the goal and was eventually tapped in by defender Conor Donovan. That was in the 55th minute of the match. In the 58th minute, Hadji Barry got a backdoor, tap-in goal off a pass from Robert Kristo.

From then on, the match was all NCFC. They got 10 shots in the second half compared to four from Memphis and scored their third goal in the 89th minute.

For the fourth time this season, Memphis gave up a two-goal lead making their hopeful journey to the playoffs much more difficult.