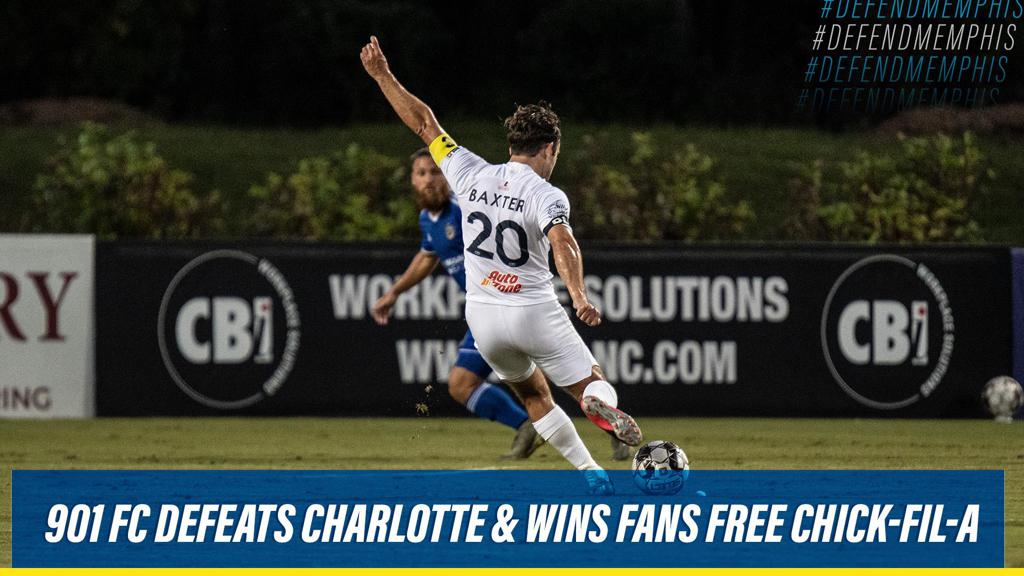 Memphis 901 FC faced off with Charlotte Independence for their final road match of the season. Already out of the playoffs, Memphis looked to stall Charlottes clinch.

Prior to kickoff, four Memphis players— Pierre Da Silva, Jean-Christophe Koffi, Rafa Mentzingen and Mark Segbers—were deemed ineligible after violating team rules. As these players had already traveled to Charlotte, Memphis was limited to three subs on their bench.

Early in the match, Memphis held over 65 percent of possession, but it was Charlotte that struck first. A cross played by Jake Areman over the top of Memphis’s defense connected with the head of Dane Kelly and put Charlotte up 1-0 in the 24th minute. The goal was Kelly’s 11th of the season and his second against Memphis.

The first goal, a beautiful strike, came from Jose Baxter, his first goal of the season. The right-footed shot from the top of the box curved around Charlotte keeper Brandon Miller, kissed the crossbar and found the side panel at the back post.

The second goal for Memphis came just two minutes later. Leading goal scorer Cal Jennings, assisted by Leston Paul, split Charlotte’s defense on a through pass and tucked the ball past Miller with a left-footed shot to the bottom right corner.

In the second half, Memphis continued to push forward and press high. Jennings scored his second goal of the match in the 86th minute. After dribbling through Charlotte's defense he placed his shot in the lower-left corner, out of the reach of Miller, putting Memphis up 1-3.

Hague ended the match with eight saves and two punches and was named Buff City Soap Man of the Match for the first time this season.

Memphis returns to play Saturday, Oct. 3 at AutoZone Park. Kickoff is scheduled for 7 p.m. Tickets will go on sale to the public on Thursday, Oct. 1.