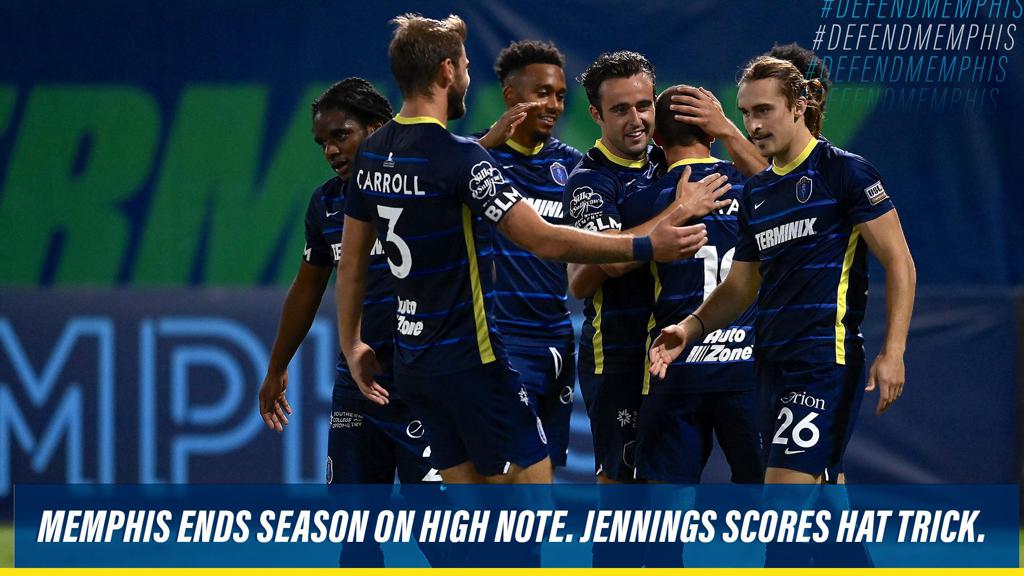 Memphis 901 FC took on Birmingham Legion FC for the fourth and final time this season.

Memphis may have been out of playoff contention weeks prior to tonight’s match, but anyone watching would’ve thought they were fighting for a spot in the championship.

Whether the motivation was proving this season’s haters wrong, fighting for jobs in 2021 or wanting to send captain Marc Burch out on a high note, Memphis came out with lots of energy from the start.

In the first 30 minutes of play, Memphis held over 60 percent of possession and outshot Birmingham five to one.

In the 36th minute Rece Buckmaster, dribbling up the right sideline to the end line, played a ball on the ground to the middle of the box. Sliding, Cal Jennings snuck the ball past Birmingham keeper Trevor Spangenberg.

In the second half, Memphis continued to dominate taking the lead in the 54th minute of the match.

After Keanu Marsh-Brown played a ball over the backline of Birmingham, Jennings found himself behind Birmingham’s defenders with just the keeper to beat. With the composure that has come expected from Jennings, he tapped the ball to the lower right corner as Spangenberg came off his line.

In the 86th minute, Jennings struck again. This time assisted by Jose Baxter, Jennings with speed touched the ball past Birmingham’s defender and ripped a shot from the top of the box and out of reach from a diving Spangenberg.

The third goal gave Jennings his first hat trick as a professional and the second hat trick in Memphis club history. The first came with Elliot Collier on  July 6, 2019 against Hartford Athletic.

In the 83rd minute, Burch left the pitch to a standing ovation as fans said goodbye to their captain for the last time.

Memphis ends a challenging season with a 4-7-4 record.