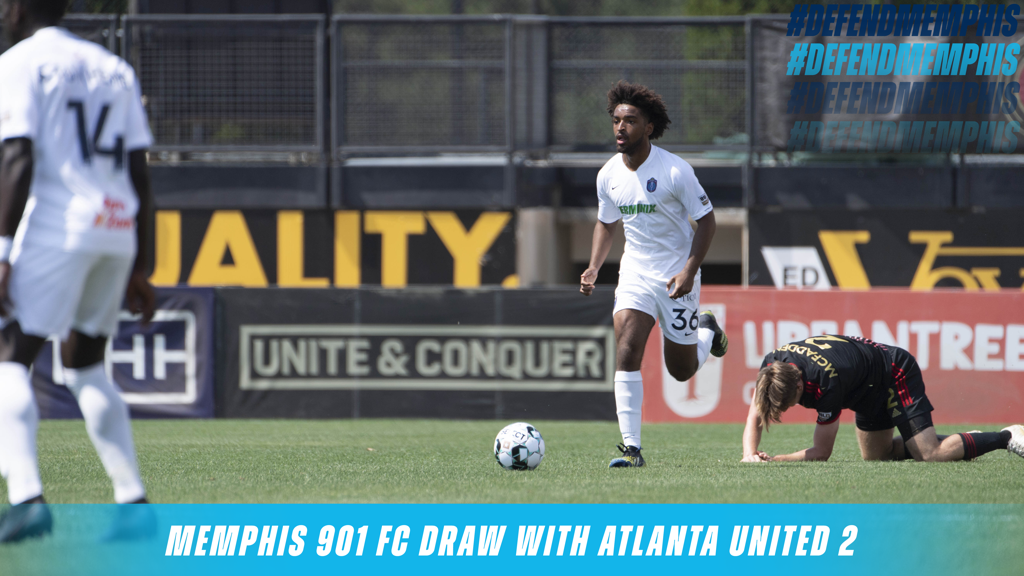 Kennesaw, Ga. – Memphis 901 FC (0-1-1) settled for a 2-2 draw on Sunday afternoon thanks to an Atlanta United 2 (2-1-2) stoppage-time equalizer. Kadeem Dacres ran the show and was named Buff City Soap Man of the Match after he accounted for a goal and an assist. Laurent Kissiedou also scored in his return to Atlanta.

The match started with a heavy Memphis presence in the Atlanta half as the chances started flowing early and often for both sides. Atlanta started their attack in the 8’ with a Matías Benítez free kick that was stopped by John Berner. Kadeem Dacres had an early shot saved in the 13’ before Michael Salazar dished up a perfect pass to Dre Fortune in the 18’ who had his shot saved by Atlanta’s Kann.

While the next ten minutes saw little action, Atlanta United 2 opened the scoring in the 28’ with an Aiden McFadden free-kick goal that curled into the top left of the net, off the outstretched fingers of Berner. After another close call from Kadeem Dacres with a shot sent just wide of the post, a pair of cautions occurred in a growingly chippy match with Francis Atuahene and Atlanta’s Efrain Morales picking up yellows in the 39’ and 42’, respectively.

Just before the halftime whistle, Dacres was able to cash in on his many first-half chances with a point-blank finish off of a Mark Segbers cross in the 45’ of play. The goal opened up the scoring for Memphis’ 2021 campaign.

After the break, Atlanta started fast as a Jack Gurr shot was palmed away by a diving Berner in the 47’. The match turned into a back-and-forth affair until the 73’ when Memphis found a breakthrough courtesy of former Atlanta United 2 player Laurent Kissiedou. Following a perfect roll from John Berner to the feet of a dashing Kadeem Dacres, the midfielder took the ball down the majority of the pitch before slipping a perfect through ball between two defenders where Kissiedou tapped it home into the bottom right corner of the net.

Although Atlanta United 2 were reduced to ten men following a Jack Gurr ejection in the 87’, the Memphis lead would only last until stoppage time where the home team found the back of the net in the final minute of play off of an Aiden McFadden goal following John Berner’s initial punch-away.

Next up, 901 FC will travel west to face divisional and first-time opponent OKC Energy FC at Taft Stadium on Saturday, May 29. Kickoff is scheduled for 7:30 p.m. CT and can be seen on CW30 – WLMT Memphis and ESPN+.