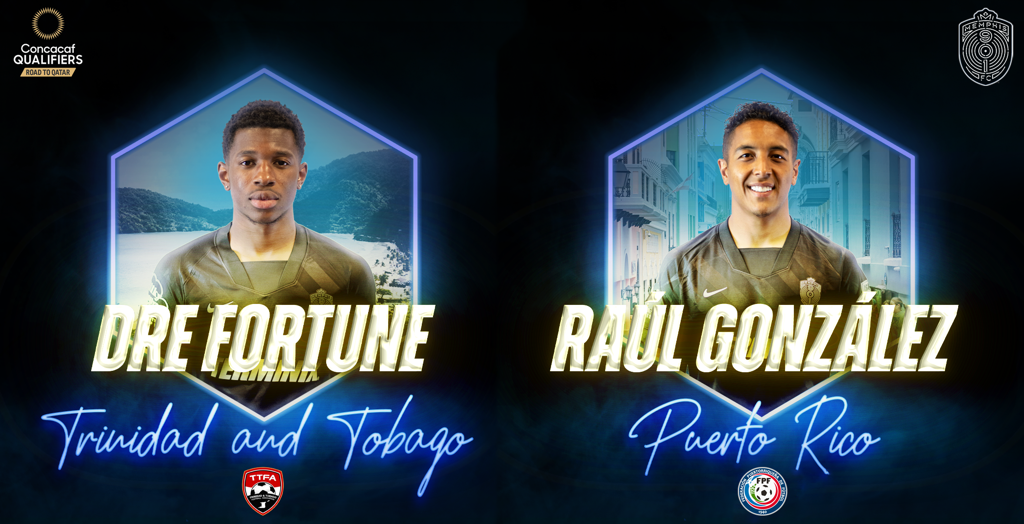 MEMPHIS, Tenn. – Memphis 901 FC defender Raúl González and midfielder Dre Fortune have been called up to their respective national teams for the FIFA World Cup Qatar 2022 qualification. González will build on four previous caps with Puerto Rico as Fortune has three to his name with Trinidad and Tobago.

“I am very thrilled and blessed to get called to the Puerto Rican national team,” González said. “To play in the World Cup qualifiers is something I’ve dreamed about since I was little boy. It means the most to my family and I which I’m very thankful for.”

“It’s always an honor being selected to represent my country,” Fortune said. “I’m excited to join the guys and hopeful that I can contribute to qualifying for the World Cup.”

For qualification, both national teams compete within Concacaf’s Group F as they seek entrance to the FIFA World Cup Qatar 2022 which is scheduled to be held from November 21 to December 18, 2022. With three rounds in the confederation’s qualification and the first round already halfway completed, Trinidad and Tobago find themselves second in the Group F table with four points as Puerto Rico sit at fourth in the table with one point.

Should Puerto Rico or Trinidad and Tobago win Group F, the winner will advance to the second round of Concacaf qualifiers, playing a two-legged home-and-away series, with the three winners advancing to the final round to face the top five Concacaf teams in home-and-away round-robin matches in a single group. Following the three rounds, the top three teams will qualify for the FIFA World Cup Qatar 2022, with the fourth-placed team advancing to the inter-confederation playoffs for potential qualification.

“It’s always an honor to wear your national side’s jersey,” Head Coach Ben Pirmann said. “Raúl had a wonderful offseason with Puerto Rico and Dre has been a mainstay with Trinidad. I’m excited for our players to represent Memphis 901 FC on the international stage in some massive tournaments for their respective countries.”