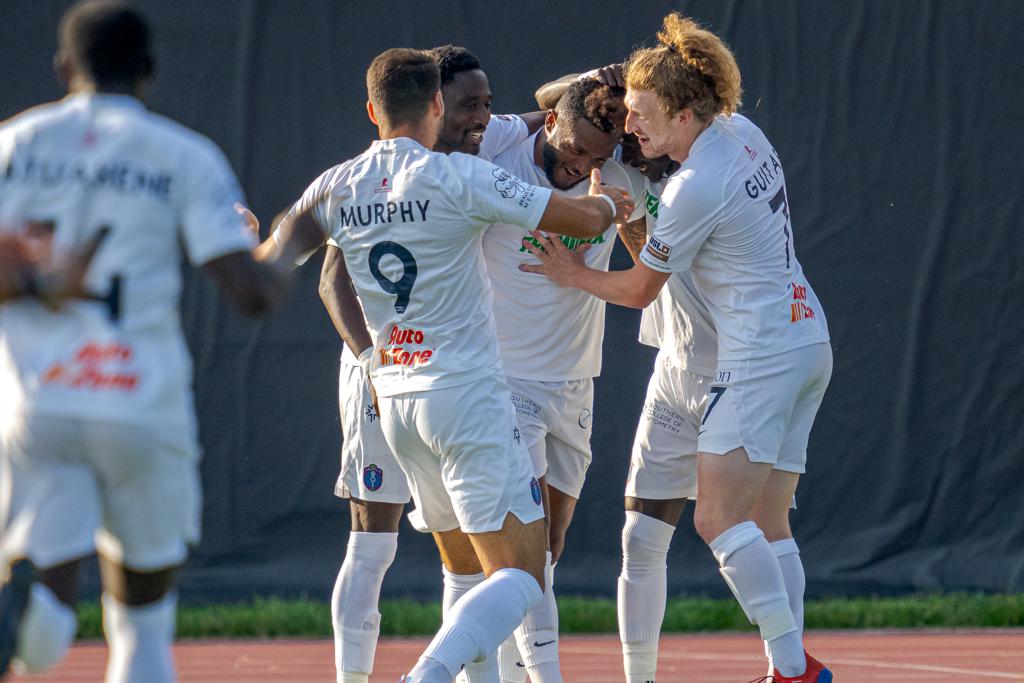 Indianapolis, Ind. – Memphis 901 FC (1-1-2) pulled out a gutty 2-1 win against division leader Indy Eleven (3-3-1) in Indianapolis Saturday evening. The win not only marks 901 FC’s first win on the young season, but also the first-ever win over Indy Eleven in club history.

In a performance that saw the visitors come into Michael A. Carroll stadium down six players due to injuries, suspension and international duty, Memphis needed to rely on a new-look lineup that featured a number of academy players on the bench. It didn’t take long, however, to jump in front as Michael Salazar stunned Indy with the quickest goal scored in club history two minutes and nine seconds into the match. With a perfectly weighted ball down the middle of the pitch, Laurent Kissiedou set up Salazar’s early strike to give the Belizean international his first with Memphis in the 3’.

Despite an early, on-target shot from Indy’s Arteaga in the 15’, Memphis continually peppered the Indy keeper with shots before cashing in once more in the 35’ minute with Kyle Murphy’s first goal of the season. The striker found a deflected Salazar shot land at his feet before tapping in the second goal of the match for Memphis.

After the break, Indy made several substitutions before controlling possession for much of the second half. Despite the possession advantage, the Memphis defense had the performance of the season as they forced five blocked shots, 18 clearances and a number of physical possessions gained in the box without conceding a foul. Goalkeeper John Berner had a solid outing once again with three saves. As the clock wound down, Memphis began to settle back and take their time on the ball as they focused their efforts on possession and passing.

After the 90’ mark, five minutes of stoppage time were added on as Memphis clung to a two-goal lead. History was made once more as academy players Matt Brucker and Tycho Collins hit the pitch as the first two academy prospects to hit the pitch for Memphis in club history. The drama wasn’t over, however, as Indy Eleven found a late goal off of a corner in the 90+6’ mark. At the end of the action, a single goal was all the opposition could muster as Memphis 901 FC secured an impressive and historic 2-1 victory over the division leaders.

“Before the game, we talked about playing with courage and that was exactly what we did,” Head Coach Ben Pirmann said after his first victory as permanent leader of the squad. “We played fearlessly; we were outnumbered, outmanned, all those things. We were playing kids that we signed this week after a high school season. We had guys that were only 50, 60 minutes fit that played 90 minutes, and they went above and beyond. That's a team effort and that's what the city of Memphis is all about. That's what this club's all about and that was rewarding for those players because they've been through a lot these last few weeks. That's what that was all about.”

Another tall task awaits Memphis as the club will travel to Kentucky to match up with Louisville City FC at the newly minted Lynn Family Stadium for the first time. Kickoff is set for 6:30 p.m. CT next Saturday, June 12. The match can be seen on CW30 Memphis and ESPN+. Memphis will wrap up the five-game road trip to start the 2021 season as they welcome Atlanta United 2 to AutoZone Park on Wednesday, June 16. Tickets can be purchased at memphis901fc.com/tickets.