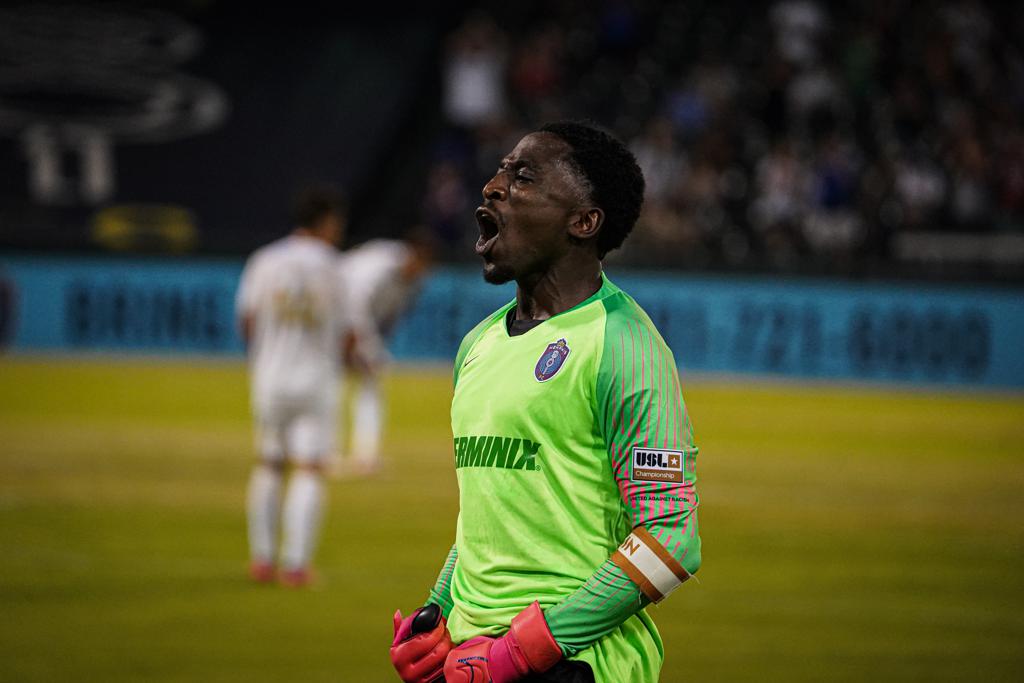 Memphis, Tenn. – Memphis 901 FC (2-2-2) claimed a resounding victory over divisional opponent Atlanta United 2 (3-3-3) in its first home match at AutoZone Park this season. Highlighted by an Atlanta ejection in the 36’ and Skylar Thomas goal in the 75’, the match came to an emphatic yet bittersweet ending as John Berner was unable to continue the match due to an injury in stoppage time which opened the door to a Mark Segbers appearance in goal to retain the advantage.

The first half got off to a raucous start as the match was chippy from the whistle and the 5,083-person crowd in attendance made themselves heard. With three Atlanta cautions received in the first half—two of which going the way of Atlanta’s Ajani Fortune, Memphis found itself with a personnel advantage just 36 minutes into the match. While Atlanta controlled possession throughout the match, Fortune’s ejection would serve as the catalyst for a potent Memphis attack that would linger throughout the evening.

By the time the second half had rolled around, Memphis had taken complete control of the match and sought the go-ahead goal. Throughout the remaining 45 minutes, 901 FC played patient, controlled and intentional soccer using their one-man advantage wisely and breaking through the Atlanta backline to create continual pressure on ATL UTD 2’s goalkeeper, Rocco Rios Novo. Rios Novo himself had a special night as the 19-year-old keeper recorded six saves to keep the match level for 75 minutes.

By that 75’, however, it was Skylar Thomas who broke the deadlock. Following an out-swinging Laurent Kissiedou corner kick into the box, Thomas used every inch of his 6’4” frame to extend himself over the defenders and head a ball into the back of the net to put the home side up by a goal—an advantage that would last the duration of the match.

As stoppage time rolled around, goalkeeper John Berner hit the ground following a non-contact injury to a lower extremity. With Berner unable to continue and out of substitutions, Memphis relied on defender Mark Segbers to suit up in goal for the remaining few minutes of stoppage time—his first time stepping into goal at any level of his career. Against all odds, Segbers recorded a game-tying high two saves to cement the victory in front of Memphis’ home supporters. Despite his shortened outing, Berner now sits at second all-time in Memphis 901 FC’s history with 27 saves.

As with Berner, Segbers and Thomas, Francis Atuahene and Leston Paul had strong showings on the pitch as well. After coming into the match in the 65’, Atuahene had an efficient evening as the Ghanaian led the team in total shots and shots on target in just 25 minutes of work. Additionally, Leston Paul proved to be a key component to the victory as the midfielder led the team in total duels with 14—winning each one.

“It shows the character of the team,” Head Coach Ben Pirmann said of the last few chaotic minutes. “[Mark] Segbers stepped up, he made a couple good saves, guys are making blocks, we’re doing the business. We talked about rewarding this community, this club, this stadium, these supporters, and we did. We won the game, and that was the biggest and most important thing. We played with heart, we played with determination, and we really pushed on them [Atlanta United 2].”

Next up, 901 FC will remain at home to face OKC Energy FC on Saturday, June 19. Kickoff is scheduled for 7:30 p.m. CT at AutoZone Park and can be seen ESPN+. For information on tickets, please click here.