Memphis 901 FC Shut Out Division Leader on the Road 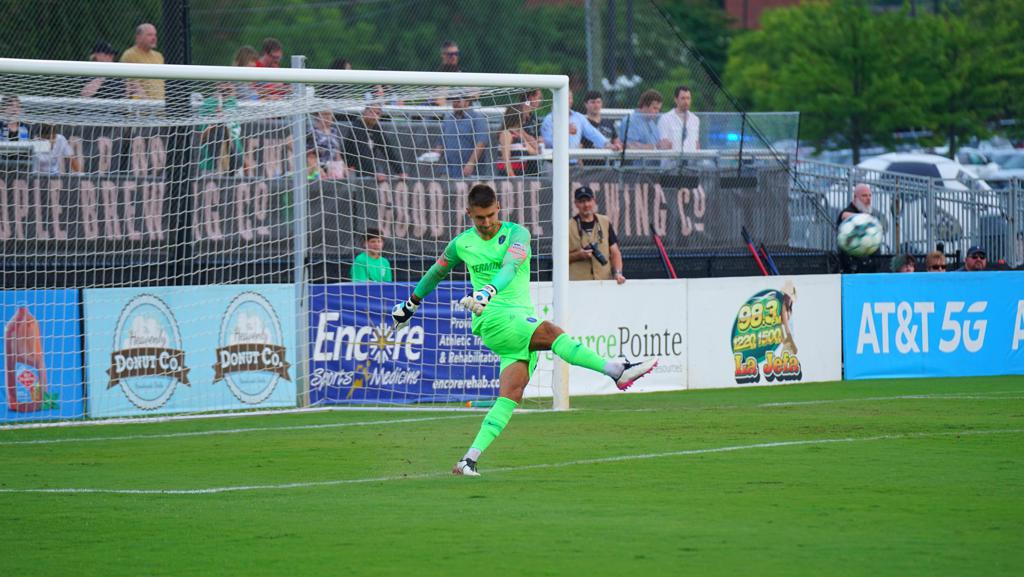 Birmingham, Ala. – Memphis 901 FC (3-4-3) stunned division leader Birmingham Legion FC (7-4-1) on Saturday night, defeating the home side 1-0. Picking up his fourth goal in three matches, forward Kyle Murphy put the visitors ahead in the 53’ while newcomer Kyle Morton stifled the Birmingham attack with eight saves in his first match with the club.

Memphis 901 FC came out with a vengeance, controlling the opening 15 minutes of the match. Forward Michael Salazar was all over the pitch early, having a shot blocked and playing a large role in the defense. After a relatively calm fifteen minutes, by the time the 30’ rolled around, Birmingham pressed hard and found a number of chances in the box that were either punched away by Morton or deflected by the defense.

After a scoreless first half in Birmingham, Memphis again came out with a strong attacking presence. After a number of chances, Kyle Murphy continued his scoring streak by collecting an errant Laurent Kissiedou ball in the box and hammering one past Birmingham’s Van Oekel. Mirroring the first half, a lull in action in the middle of the half led to a flurry of Birmingham chances to end the match. Replenishing the defense with a number of late substitutions, the defensive backline stood tall as Morton recorded a number of incredible saves to maintain the lead and a clean sheet.

With its second win over a then-division leader on the road, Memphis 901 FC will look to build on the consistency provided by Kyle Morton in goal. Morton recorded eight saves on eight shots giving the Buff City Soap Man of the Match a perfect save rate. Kyle Murphy’s goal now puts him at a tie for fourth in club history with five goals in a season. Defensively, Dominic Oduro had a strong outing, leading the team in tackles, interceptions and possessions gained.

Up next, the squad will wrap up its three-match road trip against Indy Eleven. Kickoff from Indianapolis is scheduled for July 17 at 6:00 p.m. CT and can be seen on CW30 Memphis and ESPN+.