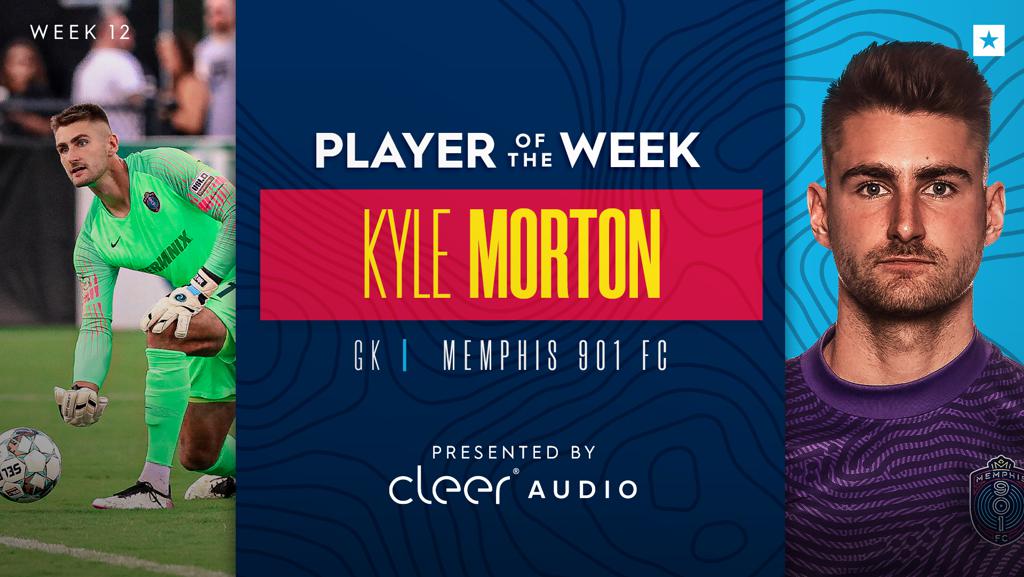 Memphis, Tenn. – Goalkeeper Kyle Morton has been named the USL Championship Player of the Week for Week 12. After joining the club on loan just one day prior, Morton was featured in the starting XI and posted a phenomenal eight-save night in which Memphis 901 FC secured a 0-1 shutout victory over division leader and regional rival Birmingham Legion FC.

After seeing little of the ball to open the match, Morton jumped into action following a flurry of Legion chances in the box near the 25’ of play. Morton recorded three first-half saves before the Birmingham attack again faded. Following Kyle Murphy’s 53’ goal and no Birmingham response, the home side ramped up its attack, sending several shots to goal. Four of Morton’s eight saves came in the final 25 minutes of the match. Finally, in the 90+5’ Morton made a spectacular, acrobatic save to deny a looping header toward goal in what would turn out to be the match-winning denial.

With a career-best eight saves, Morton is now tied for second in Memphis 901 FC history in single-match saves, just one shy of tying the record of nine set by John Berner to open the season in Birmingham. With his 100% save rate on the evening, Morton now leads the league in saves per 90 minutes after his first appearance.

“Kyle did a tremendous job in his first match for us,” Head Coach Ben Pirmann said. “These awards are team accomplishments, but we’re very excited to continue to get better. It’s always nice to have our players publicly honored.”

Riding a two-match unbeaten streak, Morton and the rest of the squad will be back in action this weekend in Indianapolis as they face Indy Eleven at 6 p.m. CT on Saturday, July 17 at Michael A. Carroll Stadium. The match will be broadcast on CW30 Memphis and ESPN+.