GET TO KNOW: Defender Niall Logue

Hear from newcomer Niall Logue on his journey from Ireland to America and how family, faith and football have helped him achieve his goals 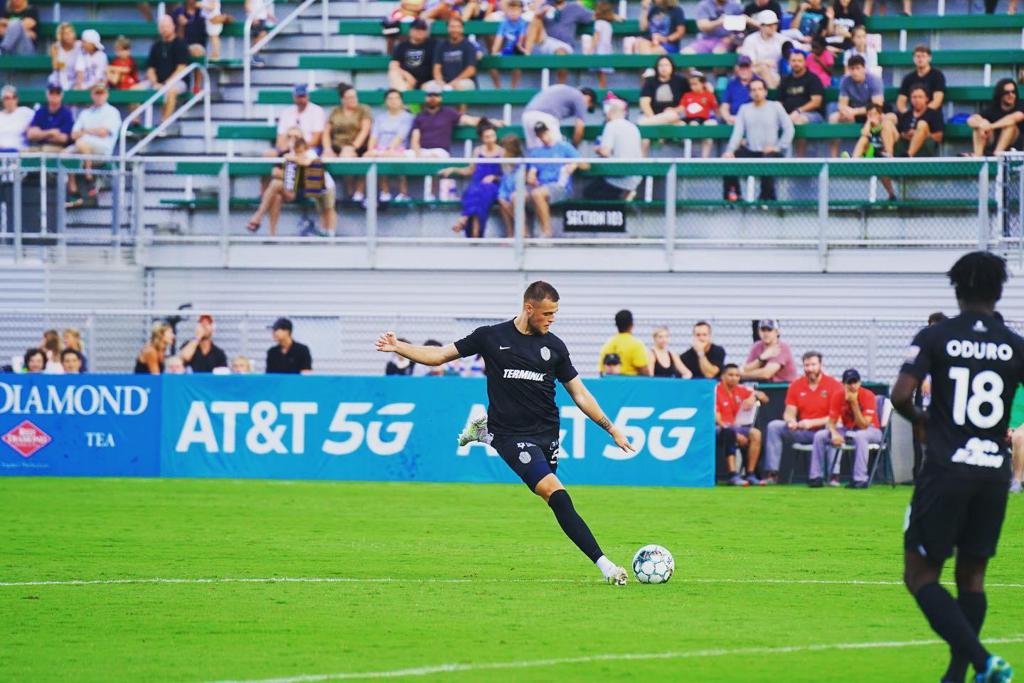 Joining Memphis 901 FC on loan just over two weeks ago, Irish defender Niall Logue has seen the pitch twice and found his place amongst his teammates. Logue has spent time with professional clubs overseas and collegiate powerhouses domestically, and his journey from Derry, Northern Ireland to Memphis, Tenn. has been anything but conventional. Propelled by his family and his faith, Niall Logue is as ambitious as they come.

Section I: Youth and Collegiate Days

Logue grew up along the border in Northern Ireland’s second-largest city of Derry. Identifying his own nationality with that of Ireland, Logue was surrounded by soccer culture from his earliest years.

“I have a big family on both my mammy and daddy’s side with a lot of cousins,” Logue said. “Most of my uncles on my dad’s side played football, and I was really just born into it [soccer] more than anything. It was a big football family, and my parents said I could kick a ball before I could walk.” 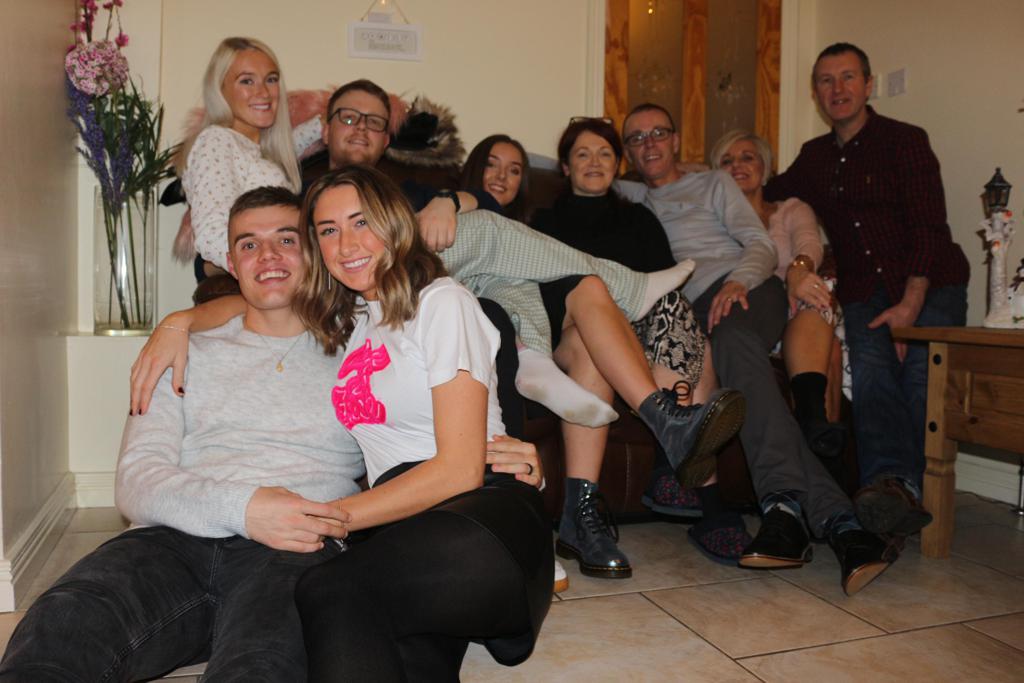 Logue with his family | Image courtesy of Niall Logue

Logue credits his parents for supporting his ambition to be a professional footballer. While his father was a runner, all of Logue’s soccer-playing uncles cousins aided the defender in his development. Logue credits two cousins—Colin Logue of Limavady United and Daniel Lafferty of Derry City—in particular, with constant support and affirmation.

“They always helped me through certain situations,” Logue said of his cousins. “I would talk to them regularly; a couple times a month. They would always text or call me and check to see how the career is going and how I’m doing. It’s nice to have two strong opinions and personalities to fall back on, especially ones who have been there and done that.”

With the support of his family, Logue started his playing career within the youth ranks of Northern Irish side Institute FC in 2010 where the 15-year-old Logue was able to develop his skillset early in his career. From 2010 to 2014, Logue matured and progressed with ‘Stute, gaining valuable experience with the club.

“I’d go in there with the other lads and train,” Logue said of his time at Institute. “With three nights a week of training and then the weekend game, it really helped me push on in my career, mature faster and understand the game faster.”

While content with playing in Ireland, Logue always knew he wanted to experience something different. After a former teammate opted to play in America, Logue found himself flirting with the idea of a move overseas.

After a trial in the United States did not initially materialize into a realistic opportunity, Logue caught the eye of Hugh Bell, the head coach of Yavapai College in Prescott, Ariz. Coincidentally, a native of Belfast, Northern Ireland, Bell recruited Logue hard, calling him and his family regularly to check in and assess where Logue’s head was at. After much consideration, Logue decided to travel across the globe, moving to the small, central Arizonan town of Prescott to play for the Roughriders.

“I always maintained the mindset of wanting to move away,” Logue explained. “When that opportunity came and to be able to mix playing football and continuing my education, it was a no-brainer for me.”

Since its inception in 1989, Yavapai College has churned out an NJCAA-leading seven National Championships and has nearly 150 more wins than the second-most winningest NJCAA school during that span. The powerhouse has also produced notable MLS talent including Sporting Kanas City’s Roger Espinoza and Real Salt Lake’s Justin Meram.

During his time at Yavapai in 2014 and 2015, Logue was named captain and NJCAA All-American on both occasions as the defender claimed a conference title in 2015. After winning match after match, Logue sought more challenging opportunities and transferred to Ohio State in 2016. While in Columbus for two years, Logue worked with fellow Yavapai graduate Justin Meram while the Iraqi was with the Columbus Crew.

“Being involved with their [Columbus Crew] U-23 for the two summers I was at Ohio State was a good experience,” Logue said. “Training at their training ground, getting to know the coaching staff there and having that link with Justin Meram was really nice.”

After four years of collegiate soccer between Yavapai and Ohio State, Logue was determined to break into the professional ranks. Despite falling in love with Arizona and thoroughly enjoying his time in the United States, Logue knew where he needed to go, and in 2018, Logue signed with his hometown club.

“Being international is tough,” Logue admitted. “I felt like everything I was doing was just telling me to go back home. I made that decision and I feel like it was the right one. Derry City was my hometown club, and I’ve always wanted to represent them. To get that opportunity was something I wasn’t going to turn down.”

Logue was able to hit the pitch four times with  Derry City in the top flight of Irish football before heading out on loan to second-tier side Finn Harps. With the Harps, Logue made an instant impact along the defensive backline, seeing the pitch 24 times and scoring a goal as he aided the Irish club to promotion to the League of Ireland Premier Division in 2018. 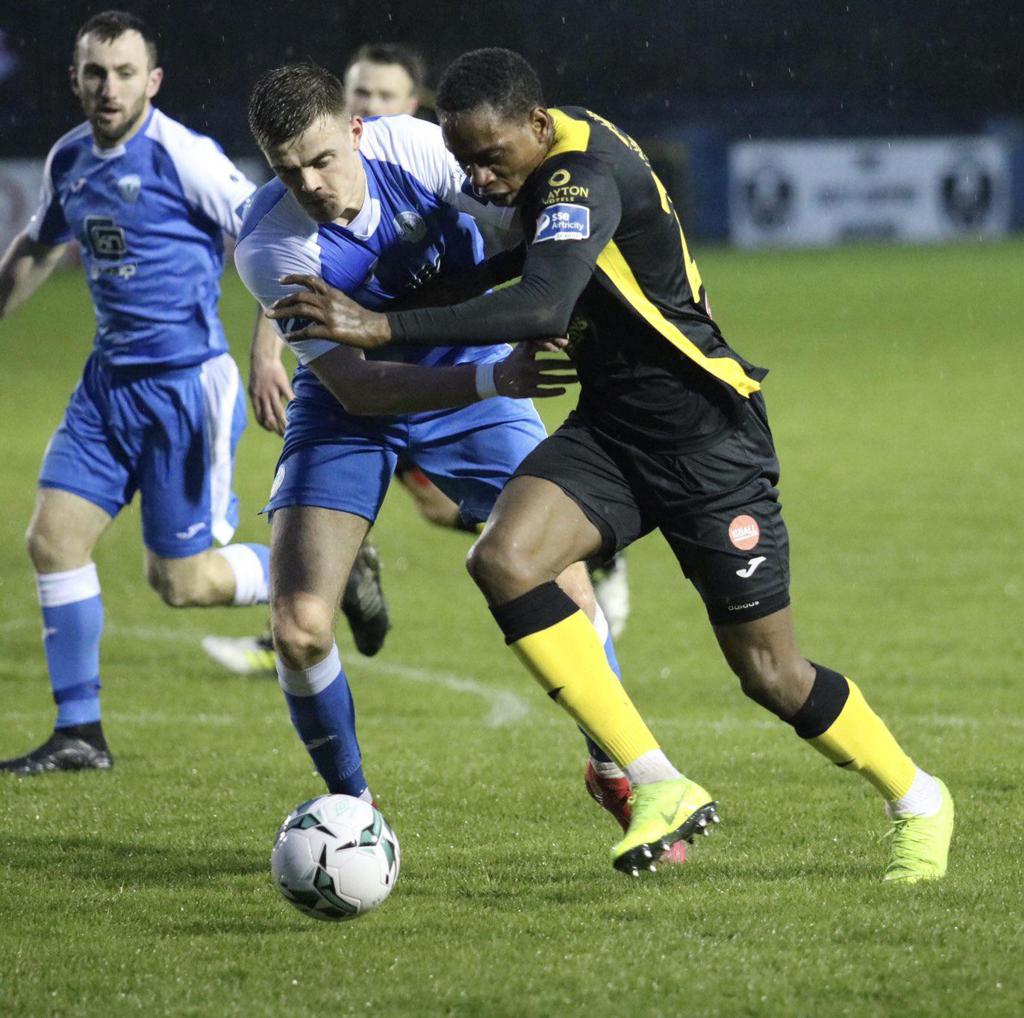 Off the pitch, the end of 2018 and beginning of 2019 was a tempestuous time for Logue. In December 2018, Logue married his longtime girlfriend, Kelsey, who he met in Arizona while at Yavapai. Soon thereafter, unfortunately, one of Logue’s uncles, Paul, a childhood mentor and constant advocate, died in January 2019.

In February of 2019, not long after the death of her brother, Logue’s mother, Jacqueline, was diagnosed with a rare form cancer. Despite starting the year in perfect health, a few weeks after her diagnosis, Jacqueline passed away. 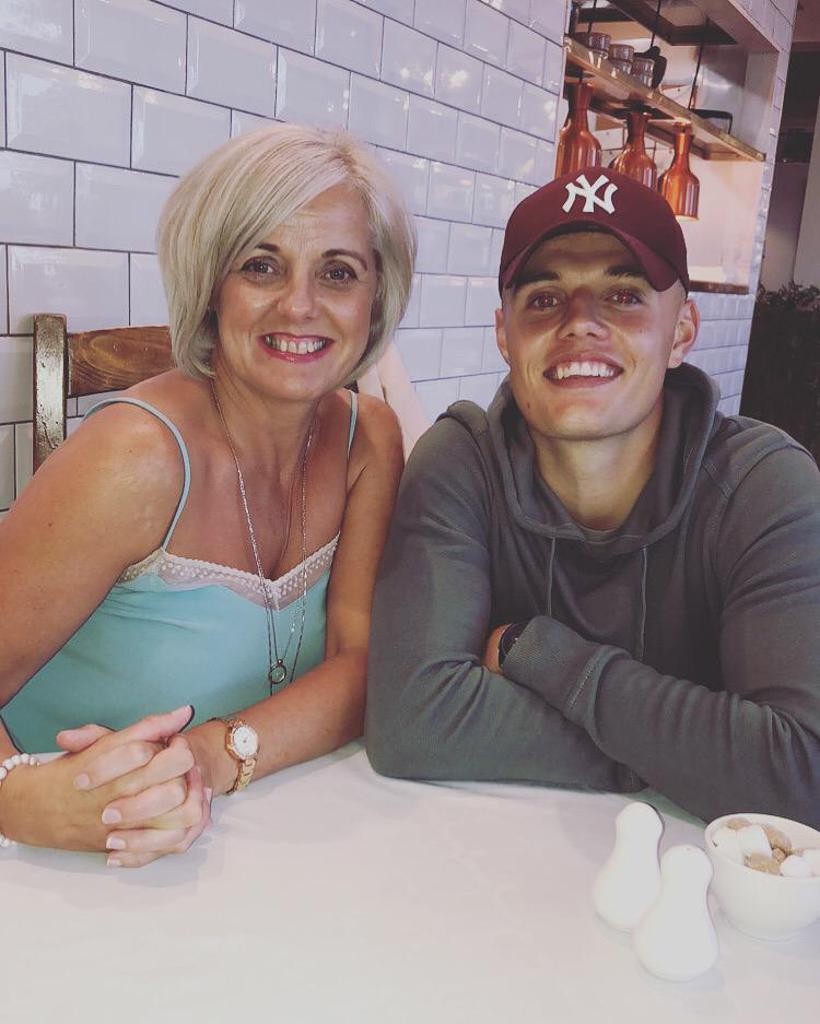 Logue and his mother | Image courtesy of Niall Logue

“Your whole existence is flopped upside down in a matter of weeks,” Logue described. “I’m not a very emotional person, and it takes me a lot to open up and be very emotional about things. After my mammy died, I went into autopilot. I got through the funeral and burial and then I dove right back into football two weeks later to take my mind off it. Looking back on it, that was probably too soon.”

After immediately resuming his career on the pitch, Logue was granted a leave from football by Finn Harps which he utilized to focus on himself and his mental health. Along with spending time with his cousin, Daniel, who played for Sheffield United at the time, Logue visited a grievance counselor to address his mental health.

A little over two years since his mother’s death, Logue admits that there are good days and bad days, and that it can be a mental battle at times. However, Logue credits his relationship with his family and God as a reason he is capable of taking things in stride.

“Focusing on me, my life, my wife and my family,” Logue said. “Keeping everyone close and reflecting on things is crucial. I learned the hard way not to take anything for granted, especially time, and that’s helped me appreciate things a lot more.”

“I wasn’t very religious myself, but my wife is very religious,” Logue added. “In a weird way, it’s brought me a lot closer to God and to my beliefs. I know a lot of people can go the opposite direction, and rightfully so; I questioned things in the beginning too. But a saying from where I come from is ‘God takes the good ones.’ She was the best mammy anyone could’ve asked for. It always gives me a little peace and comfort knowing she’s somewhere not in pain, somewhere looking down and helping guide us through life, spiritually by our side.”

After regrouping—mentally, physically and emotionally, Logue utilized his family and faith as a support system, returning to the pitch with Finn Harps. Eventually leaving for the United States and Arizona once more in January 2020, Logue went on to sign with USL League One side FC Tucson. 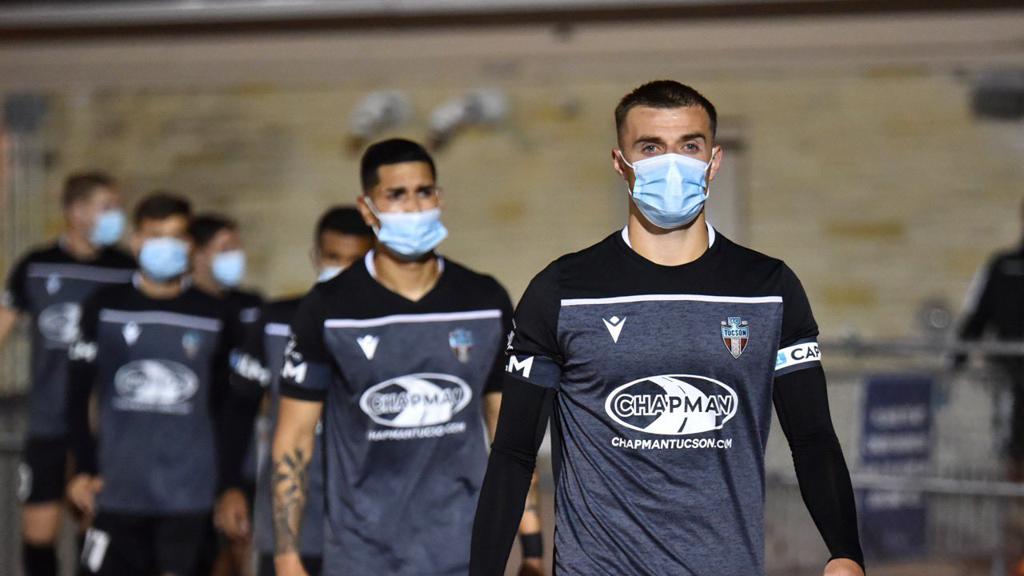 “I love the state of Arizona,” Logue said. “That’s where my wife is from, and whenever I’m done playing professionally, that’s where we’re going to go back to live and raise a family. Arizona always has a special place in my heart.”

After 16 starts in 16 matches with the club, Logue opted to search for more competitive play in the USL Championship. Making the move to Texas, Logue joined El Paso Locomotive FC at the end of 2020. Due to an injury sustained in preseason, Logue was unable to participate with the club early in the season leading him to pursue a loan. On June 30, Logue was sent out on a loan to Memphis 901 FC.

After arriving from El Paso on Wednesday, Logue was out at training the next day and on the bus to his first match with the club that Saturday. Logue saw his first minutes with Memphis as a substitute in a draw with Atlanta on July 3 before starting and playing in all 90 minutes of 901 FC’s recent victory over Birmingham. Utilizing his 6’4” frame, Logue has already accumulated two blocked shots, three interceptions and four clearances. While already seeing success on the pitch, Logue has enjoyed his short amount of time with the club off the pitch as well.

“Everyone welcomed me with open arms and all the lads were very polite—talking to me, getting to know me and vice versa,” Logue said. “It just makes you feel at ease. When the banter with the lads is good and there’s a good bit of laughing and slagging, it just makes everything that much easier. Everyone on the club side has been brilliant.”

With large aspirations, Niall Logue is only just beginning to carve the path of his career—in soccer and beyond. Finding solace in his family and his faith, Logue credits the two for taking him where he is today. 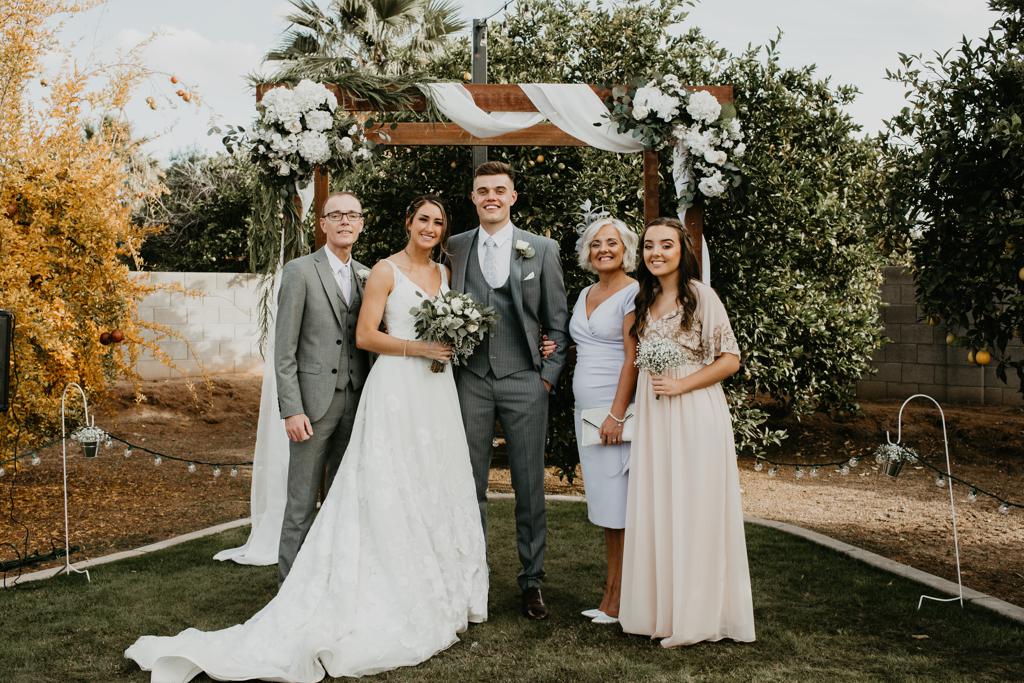 Logue with his wife and family | Image courtesy of Niall Logue

“Family is number one over everything,” Logue said. “Family and God are the two things that keep me grounded and have helped me overcome anything—the good and the bad, mistakes and achievements. Those two always keep me grounded and humble. I’m an ambitious person and I have ambitions in this sport, but I wouldn’t be where I am today without those two."