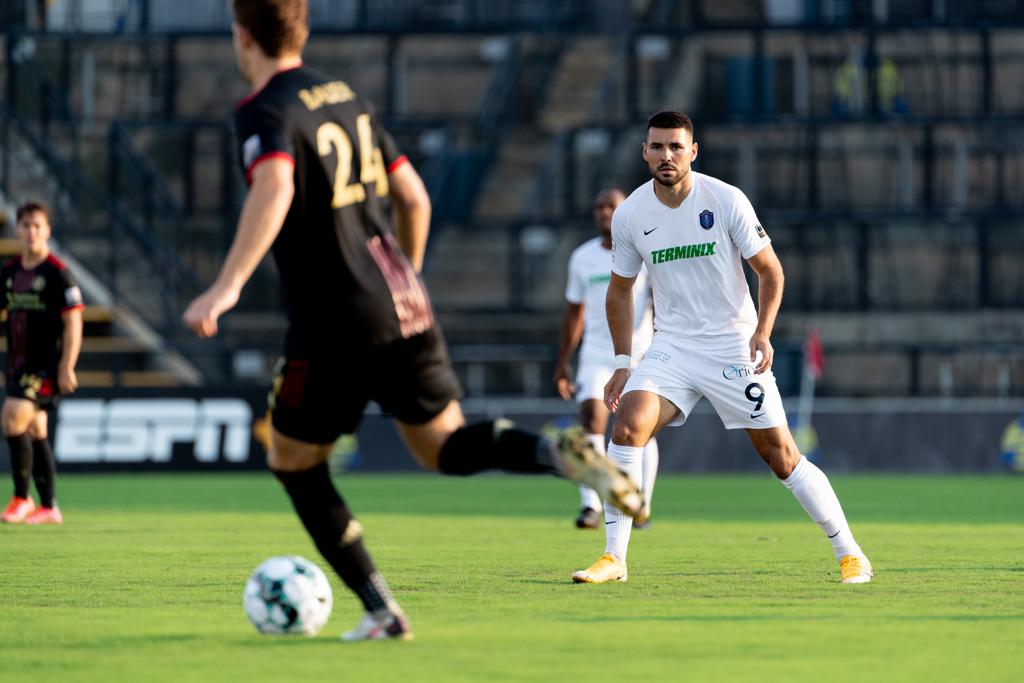 MEMPHIS, Tenn. — Forward Kyle Murphy has started the season off at a historic pace. With seven goals in just 13 matches, Murphy has already claimed sole possession of third place in scoring in club history and is just four goals shy of the all-time record with a whopping 19 matches left in the season.

Nominated for USL Championship Player of the Month for July and inching closer to the Golden Boot, Murphy’s extensive professional experience has allowed the veteran to thrive in Memphis.

The players during July

Which one gets your vote to be crowned the @CleerAudio Player of the Month?

“Every year, you take little tidbits and learn how to put yourself in better situations, and I feel that I’m able to be a lot more clinical in my chances because of that,” Murphy said. “In some seasons, if I could get three chances in a game, I could probably get a goal. Now, if I get one solid chance, I’m confident that I’m putting it away.”

Boasting the most efficient season of his career, Murphy averages a goal every 97 minutes this year and sits at a tie for eighth in the league. With six goals in his last six matches, Murphy credits early success as the key to his proficient start to the year.

“Just getting a couple of good goals early in the season has allowed me to build my confidence early,” Murphy said. “My goals help everyone trust that I can do the job on the team, and it also gives me confidence knowing guys can rely on me.”

Murphy opened his account again Indy Eleven in Memphis’ stunning 1-2 victory over the then-division leaders on June 6. After playing just 93 minutes over the next three matches, Murphy exploded to record six goals in six matches and guided Memphis to a five-match unbeaten streak in the process.

Despite needing a bandage wrapped around his head after taking a knock early in the first half of Memphis’ match against Tulsa on July 25, Murphy scored the only goal of the match in first-half stoppage time. Forward Michael Salazar set up the play with some nifty footwork at the edge of the box, as midfielder Raúl González picked up the ball and looped in a perfect cross that found the bandaged head of Murphy to put 901 FC ahead in the 45+4’.

“That one was pretty nasty,” Murphy said of his head injury. “I was pretty lucky though, I didn’t get a concussion, and I didn’t need stitches; I just needed some glue to put it back together. Once I went back out there, I had to resettle myself and know that I was ok. I had a bit of a headache, and my head was pounding, but Raúl sent me a great ball in, I made some space in the box, and was able to get a head on it first.”

The following week, Murphy found the back of the net again in Kansas City, as midfielder Andre Reynolds tightroped a ball down the pitch to find Murphy near the halfway line. Murphy outpaced his SKC counterpart to send a ball past the ‘keeper at close range and give Memphis the lead early on.

Nothing you can do when Murphy's on a mission

“It was a great little play from Andre,” Murphy explained. “I always try to get myself into the channel when I see one of the outside backs with the ball so I can be an option for him. Andre did a great job getting it down the wing to me. I saw the defender was pretty tight on me, but Andre played it so I didn’t really have to settle it, I could just run on to it.”

“Once I got the ball and turned and saw how much space I had, I knew I needed to take a big touch so I could pull away from the defender,” Murphy added. “I took another touch and then I saw the goalkeeper start to come out. One of the center backs squared off Kadeem so I couldn’t pass it to him, so I did a quick little toe poke so the keeper wasn’t settled, and I scored.”

Speaking to his skillset, Murphy is confident in his ability to use his size to win headers, maintain possession and score on the counter. The striker doesn’t mind people underestimating his speed as it can help in one-on-one situations such as his goal on Sunday.

“I’ll take my chance against any player in the league,” Murphy added. “I think my speed is underestimated, but using that, I was able to pull away from the defender on Sunday. I thought my composure in the final third was good, and I was able to get us our first one of the day.”

With Murphy and Michael Salazar combining to give Memphis the 1-2 win over Sporting Kansas City II last weekend, 901 FC travel to Oklahoma City where a win or a draw would give the club their longest unbeaten run in its history. However, while Memphis maintains its solid run of form, Murphy and the rest of the squad are focused on one match at a time.

“We all know that it’s a tough league and that there are no easy games—no matter who you’re playing,” Murphy said. “We take it game by game; we don’t look past any team. We know what we’ve done to get us into this situation, and we know we must keep improving. Everybody is working hard, that’s the foundation of it all. Everyone is doing their jobs and we’re excited for what’s to come.”

The USL Championship Player of the Month Fan Vote will run through Monday, August 9 at 11 a.m. CT and you can vote for Kyle here.