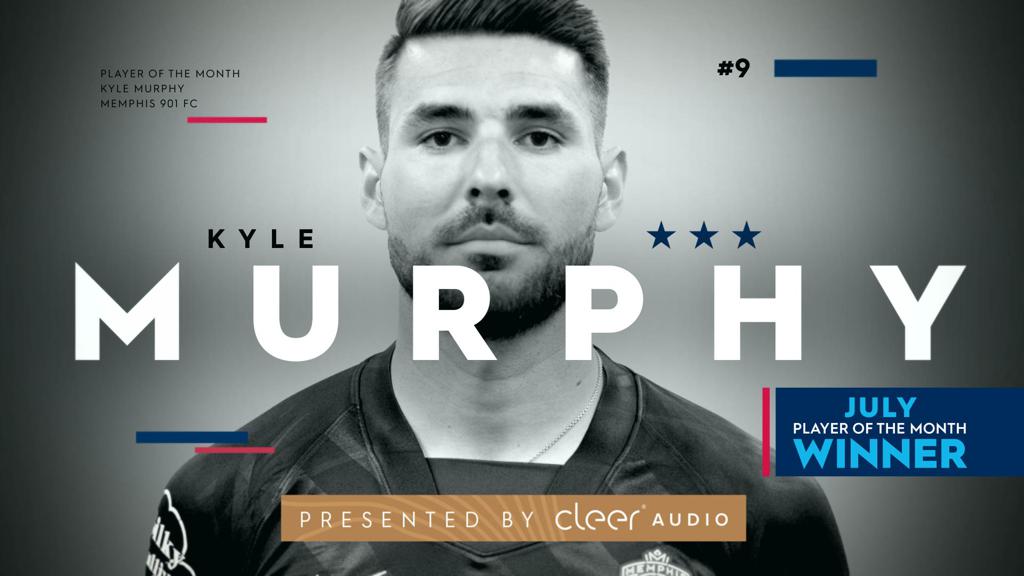 Memphis, Tenn. – Kyle Murphy has been named the USL Championship Player of the Month for July following four goals in four matches that featured two match-winners. The honor marks the first such recognition for Memphis 901 FC, as the forward led Memphis to is first unbeaten month since May 2019.

Murphy received 41% of a weighted poll that included the USL Championship Technical Committee, a national panel of independent media representing every USL market and an online fan vote held at USLChampionship.com.

Murphy started his goal-filled July with a brace in a 2-2 draw with Atlanta United 2 on July 3. After a back-and-forth first 20 minutes, Kyle Murphy poked the ball away from the rushing Atlanta ‘keeper before taking a touch and calmly rolling the ball into an empty net to give the Memphis an early 1-0 lead in the 21’. Not long after, Murphy again found the ball at his feet as he collected an errant Leston Paul deflection and buried it into the net to extend Memphis’ lead to 2-0 in the 27’.

A week later, Memphis and Murphy took down the division leader at the time in rival, Birmingham Legion FC. After a number of Memphis chances, Kyle Murphy continued his scoring streak by collecting a loose Laurent Kissiedou ball in the box, hammering one past Birmingham’s Van Oekel.

Finally, in the final match of the month, and despite needing a bandage wrapped around his head after taking a knock early in the first half, Kyle Murphy continued his remarkable form by scoring his sixth goal of the season, this time in first-half stoppage time. Forward Michael Salazar set up the play with some nifty footwork at the edge of the box, as midfielder Raúl González picked up the ball and looped in a perfect cross that found the bandaged head of Kyle Murphy to put 901 FC ahead in the 45+4’.

"It feels great to be able to help out the team in getting results,” Murphy said. “We aren’t where we want to be in the playoff race, so there's still a lot more work to be done. However, it’s great to have a streak of positive results recently. We have a great group, and there's no reason why we can’t go far this season."

In his sixth season as a professional, Murphy is having his best year statistically. Averaging a goal every 95.7 minutes—the best mark of his career—Murphy also leads the league in goals minus penalty kicks per 90 minutes (0.84). Murphy’s nine goals not only tie the forward for third place in the league, but they also put him just two goals shy of the all-time record for goals in a season with the club and just four goals shy of the all-time record for career goals with 901 FC.

"Kyle is a consummate professional who keeps his head down and works hard, Head Coach Ben Pirmann said. “He has proven to be a top goalscorer in the USL Championship and he continues to perform for 901 FC.”

Already knocking in three goals this month, Murphy will face off against Birmingham Legion FC as Memphis welcome its rival to AutoZone Park on Saturday at 7:30 p.m. CT.