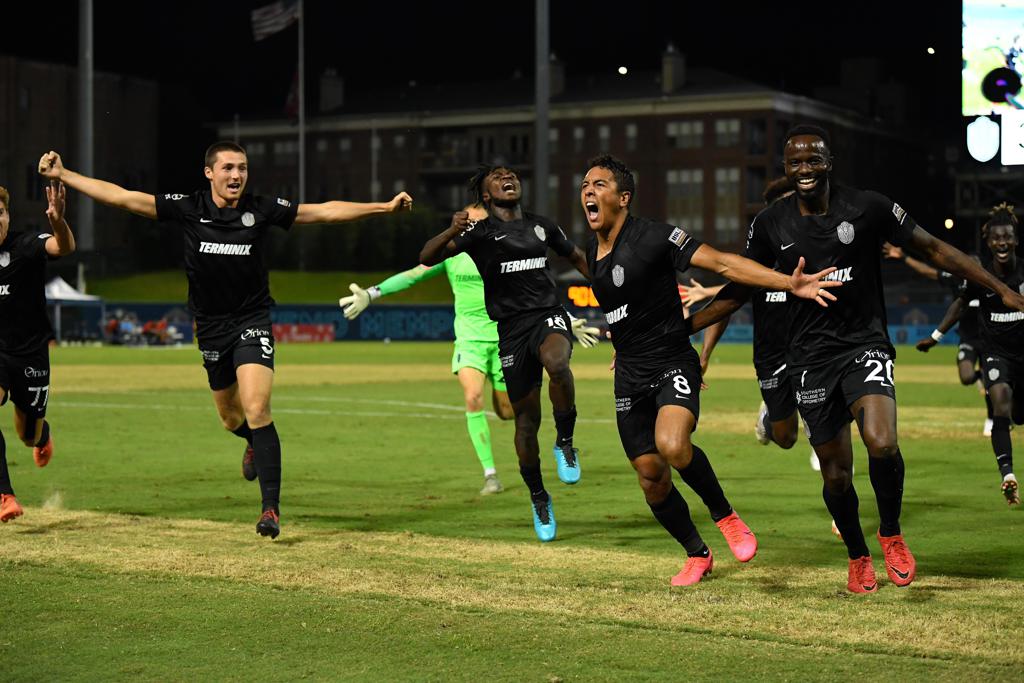 Memphis, Tenn. – Memphis 901 FC (6-7-7, 25 points) pulled off a remarkable 3-2 victory over rival Birmingham Legion FC (12-7-3, 39 points) Saturday evening at AutoZone Park. Despite a late concession of the lead, 901 FC knocked in two goals in stoppage time to claim the victory late in the match.

The first half featured a defensive showing between the two sides, as there were few chances had on either end early in the half. Forward Rashawn Dally created a pair of chances late in the first half, but both were thwarted by the Birmingham defense. The visitors would go on to deny Memphis a pair of goals via goal-line clearances. Legion FC found its opener in the 42’ minute as Prosper Kasim pounced on an errant Niall Logue ball. To round out the first half, Laurent Kissiedou capitalized on a loose ball well beyond the top of the penalty area, lofting the ball above a defender and into the back of the net.

Much like the first, the second half began with a defensive-oriented showcase until late in the match. The 1-1 score was altered when Birmingham’s Alex Crognale headed in a goal in the 79’. With five minutes of stoppage time, Memphis 901 FC pressed up the field and recorded a number of corners late in the match. Roland Lamah found his first goal and the equalizer in the 90+3’ off a Kadeem Dacres corner kick. Not long after, Memphis marched down the field once more to set up another corner kick. With Dacres on the corner again, Raul Gonzalez collected a deflected ball and hit an acrobatic bicycle kick to secure the victory in the 90+6’.

The victory for Memphis snaps a six-match winless run and notches the side just four points shy of the playoff line in the Central Division. The win also confirms the series record between rivals is tied at 3-3-4. Additionally, Birmingham Legion FC has never defeated Memphis at AutoZone Park. Laurent Kissiedou scored his second goal of the season, as Roland Lamah and Raul Gonzalez each knocked in their firsts. With Kadeem Dacres’ assist on Lamah’s goal in stoppage time, the midfielder moves into a tie for second place in club history with four assists on a season.

“It was crazy,” Head Coach Ben Pirmann said of the finish. “I thought we had lost the game. Their first goal was a gift, and we responded brilliantly. The second half was completely one-sided, and honestly, the whole game was our game. We’ve dealt with a lot of stuff this year, and we’ve played very well and lost embarrassingly. So, to come back with that attitude and that effort shows where this club and this team is at. It was unreal, but it was a deserved win.”

“I thought to myself, ‘Let me get off the ground, let me really put my whole body into this and make it 100%,’” Raul Gonzalez said of his stoppage-time stunner. “I jumped up for it, tried to find the center of the ball and make contact, and I hit it on frame and it went upper 90°. It was a little bit of luck and a little bit of concentration. I was kind of shocked when it went in, but I was relieved to know it went in, because what a time to score. Given the season and knowing where we’re at, to get a result coming off of multiple ties recently is a great way to move forward.”

“Honestly, I’ve never seen anything like it,” Roland Lamah said of Gonzalez’s goal and the team finish. “It was amazing, especially playing against a good team like that. We believed from the first half to the end. I’m happy for Memphis and I hope we can keep this up.”

Memphis will return to AutoZone Park to face Atlantic Division opponent the Miami FC on Saturday, Sept. 11. Kickoff is scheduled for 7 p.m. CT and the match will be broadcast on CW 30 Memphis ESPN+.