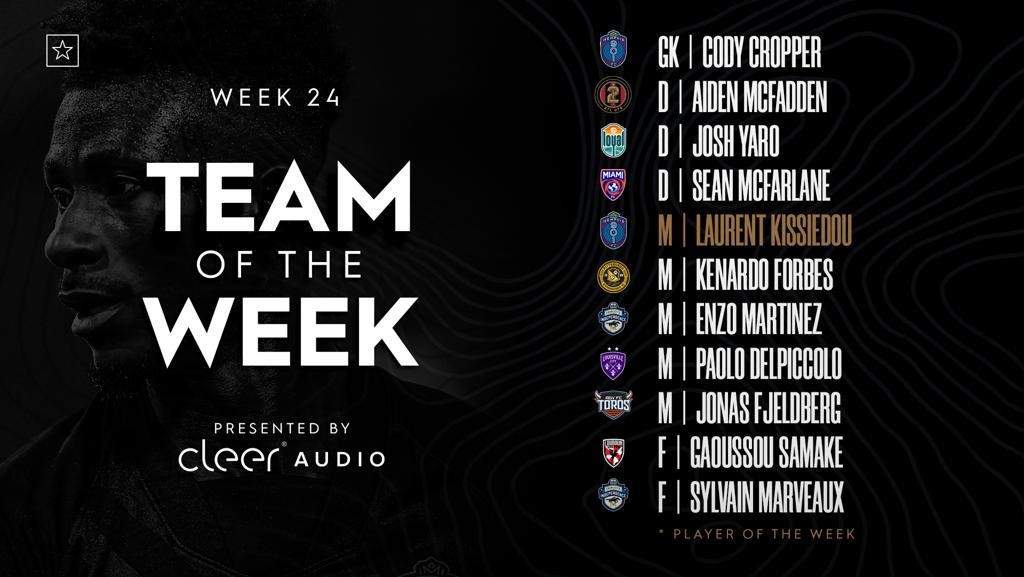 MEMPHIS, Tenn. – Midfielder Laurent Kissiedou headlines the USL Championship Team of the Week presented by Cleer Audio for Week 24 of the 2021 regular season and is accompanied by goalkeeper Cody Cropper. Earning Player of the Week honors, Laurent Kissiedou guided Memphis 901 FC to a crucial victory over FC Tulsa on Saturday with his first professional brace. Additionally, Cody Cropper recorded eight saves in the 0-3 shutout victory for the visitors.

Kissiedou scored his first of the night from long range as the Ivorian collected the ball in the middle of Tulsa territory to chip a curling shot just under the crossbar and above the reach of Tulsa’s Wormell. Later, in the third minute of first-half stoppage time, Kissiedou gathered a ball from Alan Winn at the top of the box and sent it under the outstretched glove of Austin Wormell to further extend Memphis’ lead before the break.

Kissiedou’s brace bumps his total goals scored to four—the second most this season behind forward Kyle Murphy’s 15. Additionally, Kissiedou’s three shots—which all landed on target—move the midfielder into fifth place in a single season in club history with 33 on the year.

On the other end of the pitch, the defense proved to be impenetrable for the duration of the match, and Cody Cropper accumulated a season-high eight saves which earned him Buff City Soap Man of the Match honors. Cropper’s sturdy showing in goal saw him tie for the second most saves in a single match in club history and tie for the third most saves in a career with 901 FC. Additionally, Cropper and the defense have allowed just one goal over their last four matches—the fewest allowed by any USL Championship team in that span at the conclusion of the match.

“We are very proud as a club for Laurent and Cody,” Head Coach Ben Pirmann said. “These individual awards are indicative of team achievements. My wish moving forward is that we have multiple players honored each week as we push for our team goals.”

Memphis continue to push for its first playoff appearance in club history as five of its remaining seven matches will take place at AutoZone Park. Next up, 901 FC welcome Sporting Kansas City II to AutoZone Park on Wednesday, Oct. 6. The match will kick off at 7 p.m. CT and ticket information can be found here. The match will be broadcast on ESPN+.