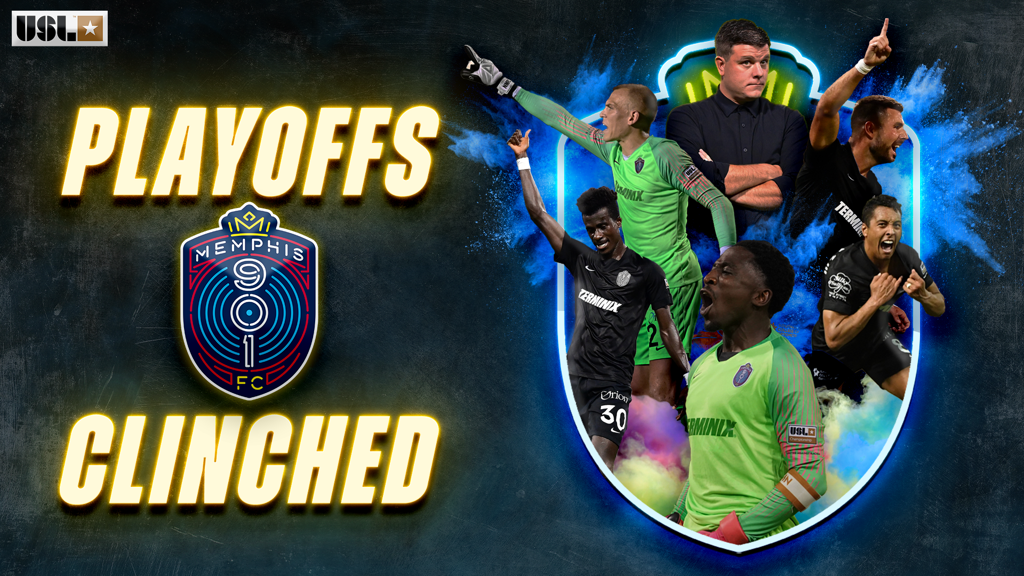 MEMPHIS, Tenn. – Memphis 901 FC has clinched a berth in the 2021 USL Championship Playoffs for the first time in the club’s three-year existence. With three matches remaining in the regular season, Memphis have already set club records in wins (12), points (44), and goals (40).

Memphis’ remarkable turnaround started with a seventh-place standing in the Central Division on Sept. 4. Sparked by a pair of stoppage-time goals to stun rival Birmingham Legion FC with defeat at AutoZone Park on Sept. 4, 901 FC rallied to earn seven wins and a draw in its last ten matches, outscoring opponents 22-13 in that span and surging up to third in the competitive Central Division.

While Memphis have clinched their spot in postseason play, its seeding is still to be determined. Memphis can guarantee the three seed in the Central Division by winning its remaining three matches or by FC Tulsa dropping points. If Memphis clinch the three seed, it will face the second-seeded Atlantic Division team which could be Charlotte Independence, Pittsburgh Riverhounds SC or the Miami FC. Should 901 FC earn the four seed, it will travel to face the top-seeded Tampa Bay Rowdies from the Atlantic Division.

“Our goal since the players arrived in April was non-wavering: do whatever it takes to make the playoffs,” Head Coach Ben Pirmann said. “I am so proud of this group of men and our staff. They’ve put every ounce of their beings into achieving that goal.

“I’m excited for our players and our club, but I’m also thrilled for our supporters and this community,” Pirmann added. “We will continue to focus on improving on the pitch and push as hard as possible to make our supporters proud.”

“Reaching the playoffs has been our goal from day one,” Sporting Director Tim Howard said. “We couldn’t be prouder of the job that Ben [Pirmann], his staff and all of our players have done this season. Their commitment to this club and its success has set the standard.”

“From the beginning, our commitment was to build a team worthy of competing for a USL Championship title,” Principal Owner Peter Freund said. “Tim [Howard] and Ben [Pirmann] have done an outstanding job of assembling this squad and creating an exciting brand of Memphis football.

Next time out, Memphis will be tested on the road as the club travels to Kentucky to face Louisville City FC on Saturday, Oct. 23. Kickoff from Lynn Family Stadium is set for 6:30 p.m. CT and the match will be broadcast on ESPN+ and WMC+ (5.5 - Over the Air, 906 - Comcast, 6 - Dish). Memphis’ trip to Louisville will be the last road match of the regular season before 901 FC finish October with a pair of home matches against FC Tulsa on Oct. 27 and Indy Eleven on Oct. 30.