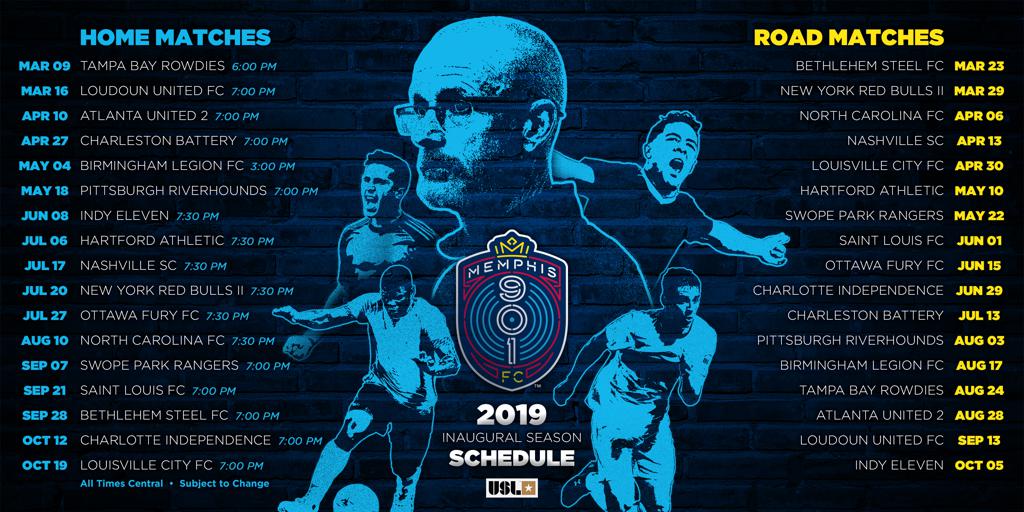 Fifteen of Memphis 901 FC’s 17 home matches are scheduled for Saturdays, continuing AutoZone Park’s reputation as a hub for weekend activity in Downtown Memphis for a bulk of the calendar year.

Of note, Memphis 901 FC’s first match against Nashville SC comes on Saturday, April 13 in Nashville, with the return trip to Memphis set for Wednesday, July 17. Memphis 901 FC hosts the two-time defending USL Cup champions, Louisville City FC, on the final date of the regular season, Oct. 19, and visits Louisville on April 30. Memphis 901 FC finishes the regular season with five of its final seven matches at AutoZone Park, setting up an exciting stretch run in front of the hometown faithful.

Friday, May 10 – at Hartford Athletic

Wednesday, May 22 – at Swope Park Rangers

Building off an historic 2018 season that saw almost three million fans attend games, the 2019 USL Championship regular season will see the league’s 36 teams play home-and-home series within its own conference in the regular season. All of the action will be available digitally through ESPN+, with future announcements regarding the league’s national television schedule to be made at a later date.

The single-elimination format will then continue for the following four weekends in a fixed-bracket format, with the higher seed in each matchup serving as host through the Eastern and Western Conference Finals. The 2019 USL Cup will be held between Nov. 14-18, 2019 and be hosted by the conference champion with the better regular-season record.