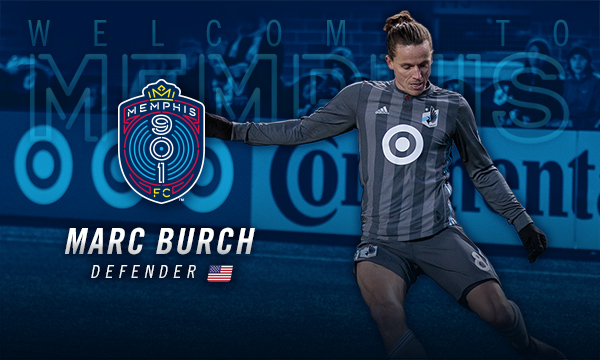 “Marc is vastly experienced and is a strong addition to the squad as we begin preparations for our inaugural season,” Bell stated. “We will be drawing heavily on his leadership and work ethic as we build towards the match versus Tampa Bay Rowdies on March 9.”

“Marc is the veteran leader that we have been looking for to steer us in Year 1, and his experience at the highest level makes him the perfect captain to lead the way,” Mulqueen said. “It is a coup for us to bring an MLS player still in his prime to the City of Memphis.”

Burch has played the previous 13 seasons in MLS since his professional debut in 2006, suiting up for the LA Galaxy, Columbus Crew, D.C. United, Seattle Sounders FC, Colorado Rapids, and Minnesota United FC. He has started 191 of 234 MLS games, and he also has 11 postseason appearances. With D.C. United, Burch won an MLS Supporters’ Shield in 2007 and the Lamar Hunt U.S. Open Cup in 2008.

Additionally, while with the Colorado Rapids, Burch was teammates with Memphis 901 FC minority owner and soccer legend Tim Howard.

“I very much enjoyed playing with Marc with the Rapids, and I am happy he chose to continue his professional career in Memphis,” Howard said. “His toughness, passion, and dedication will fit perfectly with what Andrew Bell and Coach Mulqueen are building in The Bluff City.”

Prior to being selected 24th overall by the LA Galaxy in the 2006 MLS SuperDraft, Burch starred collegiately at the University of Evansville from 2002-04 and at the University of Maryland in 2005. While with Maryland, he scored the game-winning goal in the College Cup championship against New Mexico.

With preseason beginning on Monday, Memphis 901 FC has announced five preseason matchups to tune up for the 2019 USL Championship campaign:

Memphis 901 FC’s inaugural USL Championship season kicks off at AutoZone Park on Saturday, March 9 at 6:00 p.m. against the Tampa Bay Rowdies. Season tickets and group tickets are available, with full season tickets starting at just $10 per match. Call (901) 721-6000 or go to www.memphis901fc.com/tickets for more information.